Tick-Tock Jr. is a small blue creature that resembles an alarm clock. His eyes are green and usually are seen expressing a laid back appearance, but he appears quite competitive when Kirby squares off against him. He has two pinkish-red feet and pink rosy cheeks. On the top of his head, he has two bells and a handle that are a golden orange. Much like Mr. Tick-Tock, he has two glove-like hands. Unlike Mr. Tick-Tock however, Tick-Tock Jr. lacks a nose and has a visible mouth.

Tick-Tock Jr. is the representative of the Time Trial mode of play. When the player selects Time Trial, Kirby is faced with a seemingly-endless puzzle of blocks. The gameplay is identical to the regular game mode puzzles, however, it is ongoing and the match only ends when three minutes pass, after which Kirby's score is tabulated.

Throughout the match, Tick-Tock Jr. serves as the opponent. He routinely stomps the ground, which adds in rows of new puzzle blocks as the match goes on. 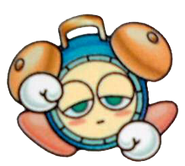