Kirby Wiki
Register
Don't have an account?
Sign In
Advertisement
in: Copy Ability, Articles with non-canonical information, Copy Abilities in Kirby: Right Back at Ya!,
and 4 more
English

None
Fire, Ice or Lightning depending on enemy thrown. (requires Copy Scroll

Throw is one of Kirby's many Copy Abilities. The ability debuted in Kirby's Adventure, and specializes in throws and grab attacks.

With this ability, Kirby inhales an enemy or projectile to grab it and then throws it in any direction. This will KO most enemies hit by the thrown object. The thrown enemy or projectile will always be decimated after the attack. Throws cannot be performed on any enemies that Kirby can't inhale, like bosses and mid-bosses (although in some games, Kirby can Throw defeated mid-bosses.) If Kirby tries to inhale one of the major members of the Squeak Squad, however, it will stun them and make them drop whatever Treasure Chest they happen to be holding (as with his regular inhale.)

While Kirby is aiming his attack, all normal enemies that touch him will be KO'd and all mid-bosses or bosses nearby take huge amounts of damage per second until the object is thrown. This strategy, while unreliable, can be abused to defeat the strongest of bosses within an extremely short time frame. The same happens while Backdrop Kirby is holding an object or enemy. Throw can also take on an element with a Copy Scroll if the enemy gives an ability that is related to the fire, ice, or electric elements. This will burn, freeze, or electrocute objects and enemies.

Throw's headband is similar to that of Suplex in that it is blue (though the Throw headband is in a lighter shade and Suplex Kirby is, on an unrelated note, darker).

Like some of the other returning abilities in Kirby: Squeak Squad, Throw gains a new idle animation: Kirby holds his arms in a fighting pose, while his headband blows in the wind.

Throw was featured in the anime once, and was the last regular ability to appear in the series. Throw's identity isn't clear to any of the characters at first (not even Meta Knight) until he starts to throw his opponent around. Like in the game version, Kirby first uses his inhale to grab them. Throw Kirby's most powerful move is the Tornado Throw, which throws the enemy clear out of the atmosphere and into a black hole in deep space. Cowardly Creature 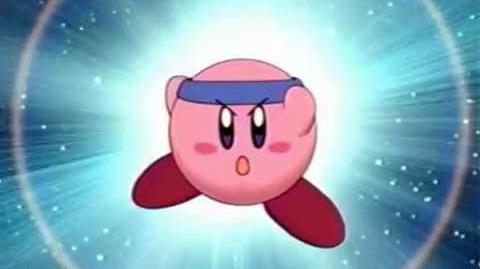 Kirby Right Back at Ya! Hoshi no Kaabii - Throw Kirby Transformation

In the transformation sequence, the Throw headband appears. It ties Kirby up a few times, but he gets himself out and puts the headband on his head. 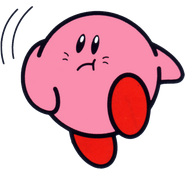 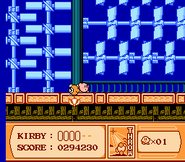 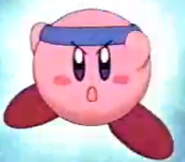