The Theater is a menu feature appearing in many games in the Kirby series. It sometimes needs to be unlocked by fulfilling certain requirements, such as through completing a game's story mode.

The Theater allows the player to watch story clips and cutscenes from the game anytime he or she wishes to. Most cutscenes in the Theater need to be unlocked through viewing them while playing the game, while others are unlocked through completing the game 100%. While Kirby's Dream Collection Special Edition does not have a Theater option, it does contain a feature called Kirby's History; this feature allows players to watch short clips from every previous Kirby video game (excluding Kirby's Toy Box and Kirby Slide), three full-length Kirby: Right Back at Ya! episodes, and a orchestral video called "Gourmet Race to Green Greens: Chamber Music." In the Japanese version, the player can read various editions of Kirby manga in this feature as well.

Games Theater is available in 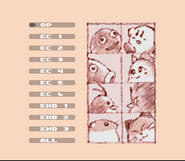 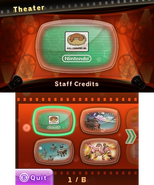