In this sub-game's intro, Kirby is seen taking a walk- but he accidentally falls through a hole. He ventures through what seems to be a cave, and must escape. Throughout the sub-game, he has the option of collecting Treasure Chest items. Each treasure has a value in Gold, which is also the player's score. 100G (100 gold) is equivalent to 1 USD - this is found in the Dime and 100-Dollar Coin items, which are worth 10G and 10,000G, respectively. The Great Cave Offensive's more adventure-based layout makes it somewhat unique within the classic Kirby series.

In the sub-game Meta Knightmare Ultra, every piece of food disappears, and every Maxim Tomato and Treasure Chest is replaced with food. Areas that do not lead to the mine cart are also removed.

As Kirby, the player walks through an environment that resembles a cave. There are a total of sixty treasures strewn throughout the cave. There are Save Cottages in every region which contain a pad to Kirby's progress, and special rooms before a boss fights which contain Copy Essences and a Maxim Tomato. The player traverses the regions in sequence; a forested area (Sub-Tree Area), a lake (Crystal Area), a castle (Old Tower Area), and a garden (Garden Area). Most are guarded by a boss - the bosses are unique to this game (including the Active-Battle System-based computer boss called Computer Virus).

The four areas are:

Gathering treasure is the main objective and the source of difficulty in The Great Cave Offensive. In general, more treasures are hidden in obscure places and are more difficult to obtain in later regions, while the hidden treasures are worth more in Gold. Many of the treasures make references to other notable franchises through their appearance or names.

The Great Cave Offensive appears as a stage in Super Smash Bros. for Wii U and Super Smash Bros. Ultimate. All four sections of the cave form a stage. The Sub-Tree Area is at the top, the Crystal Area is to the right, the Old Tower Area is in the bottom middle, and the Garden Area is in the bottom left. This stage features Treasure Chests, mine carts, cannons, and Danger Zones, which can instantly KO players with more than 100% damage. Treasure Chests can be broken and will drop items. Players can ride and dismount from mine carts, using them to attack other players. The cannons act as they do in Kirby Super Star/Kirby Super Star Ultra: they continuously rotate in eight directions, and players who enter can be shot out by pressing a button. However, not every angle is preferable, as firing straight down will result in a self-destruct.

The Great Cave Offensive and its Ω and battlefield forms can be played in 8-Player Smash. 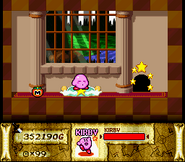