Questions are asked about Fololo and Falala's origins since the two of them have been with Tiff and Tuff's family for as long as they remember; however, Sir Ebrum and Lady Like, who apparently know the truth, decide to stay silent about it. Meanwhile, King Dedede gets his latest monster from Nightmare Enterprises and decides to cause trouble in Cappy Town. Kirby happens to be in the wrong place at the wrong time and is split into two entities by the monster Slice n' Splice. Fololo and Falala decide to protect the Kirbys, and they eventually find out, thanks to Slice n' Splice, that the two Kirbys and themselves have a lot in common.

The episode starts off with King Dedede calling Fololo and Falala into the Throne Room. King Dedede asks them to go to Mabel's and get his fortune. However, Escargoon stops them and says that Fololo should accomplish the task alone, as there is no reason for both to go. Fololo, however, states that he and Falala are a team and that they never go anywhere alone. King Dedede demands that they split up because he's the king and he gives the orders. However, the duo state that they only respond to Sir Ebrum and Lady Like. King Dedede threatens them that if they don't split up, both of them will be kicked out of the castle. Saddened, Fololo and Falala explain to Tiff what the king had ordered them to do.

While complaining, however, Tuff asks his mother who needs to do subtraction homework, and Lady Like replies that he does when she subtracts his allowance. Tuff feels devastated, and Sir Ebrum explains that his mother was just kidding, but Lady Like tells him that they're his parents and that they should show the noble boy discipline; Tiff abruptly enters and questions where she, her brother, Fololo, and Falala came from. Worriedly, Lady Like and Sir Ebrum conjure a false story on how a storm swept them here, but the kids don't buy it. Tiff asks where they really came from, but her mom tells her they found Fololo and Falala in the same place they found Tiff and Tuff.

Tiff doesn't believe them and demands to know the truth. Sir Ebrum then tells Tiff, Tuff, Fololo, and Falala to go along with their business. Lady Like and Sir Ebrum, knowing this day would come, reminisce about the day they met Fololo and Falala when Tiff was still an infant. They were sitting outside in the castle gardens when suddenly, Fololo and Falala fell from nowhere. Sir Ebrum and Lady Like later found out that they came from a monster called Fofa who was split into two separate beings. They hoped that the information would never get out, but unfortunately, Kirby heard the whole conversation and started saying the name "Fofa." Meanwhile, a Waddle Dee hands Escargoon a letter from the fortuneteller. The letter read: "'If you look for trouble, your trouble will double." It also states that Dedede owes money for the fortune. He whacks Escargoon with a hammer and decides to order a monster from Nightmare Enterprises. The N.M.E. Sales Guy then tells Dedede that he has a great deal on a monster. He says that its name is Slice n' Splice and that it cuts its foes in two and mixes their parts. The N.M.E. Sales Guy says that to "preferred customers" they will throw in a how-to video and two free weapons. Escargoon reminds Dedede of his fortune, but Dedede ignores him and orders the monster anyway. Escargoon asks if they should watch the how-to video. Dedede agrees, but while Escargoon is putting the video in the VCR, he sics Slice n’ Splice on Escargoon. Escargoon runs away but runs into King Dedede, which causes Slice n’ Splice to get them both. Dedede says that he feels sluggish while Escargoon says that he feels bloated. They look at their bodies and scream in terror to see that their heads have been mixed up.

Sir Ebrum and Lady Like hear this scream, but Sir Ebrum says that its just Dedede and Escargoon losing their heads over something. Sir Ebrum and Lady Like tape Kirby’s mouth shut so he won’t be able to say the name "Fofa." Dedede and Escargoon take their new monster to Cappy Town so they can have some fun. Slice n’ Splice mixes up most of the Cappies with sheep, but he mixes Chief Bookem with Dedede’s body and Professor Curio’s with an ammonite shell and even mixes up Tokkori and Rick. They leave in search of Kirby. Mayor Len Blustergas then demands Dedede to give them back their bodies. Escargoon bribes Dedede to give them their bodies back and to pursue Kirby instead. Meanwhile, Rick and Tokkori encounter Tiff, Tuff, and Fololo and Falala, who notice the changes. Rick and Tokkori explain that Dedede has ordered a new monster and that Kirby needs to stop it. Suddenly, Kirby comes out of nowhere with the tape still on his mouth. Dedede and Escargoon pull up with Slice n’ Splice just behind. Slice n’ Splice tries to slash Kirby with his moon rod, but Kirby jumps over him. However, Dedede counters Kirby’s jump by ramming his tank into him. This makes Kirby bounce off the car, rendering him vulnerable. With one slash, Slice n’ Splice slashes Kirby with the moon rod, causing him to be separated into two different beings. 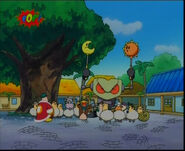 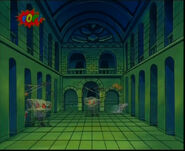 Two Slice n' Splices appear at the same time during the chase scene. This is, however, a cartoon effect.
Add a photo to this gallery

Changes in the Dub

Retrieved from "https://kirby.fandom.com/wiki/The_Fofa_Factor?oldid=326137"
Community content is available under CC-BY-SA unless otherwise noted.