Team Kirby Clash Deluxe is an action RPG Kirby game developed by HAL Laboratory and published by Nintendo as a Nintendo eShop exclusive for the Nintendo 3DS family of systems. It was released in North America on April 12, 2017, in Japan on April 13, 2017, and in Europe on April 13, 2017. An upgraded, stand-alone version of the Kirby: Planet Robobot sub-game Team Kirby Clash, it has improved single- and multi-player modes, as well as new stages and bosses. It is the first free-to-start game in the Kirby series, and the first to allow interactions with other players over the internet, although true online multi-player is unavailable. Its successor is Super Kirby Clash.

In the distant past, a faraway place known as the Dream Kingdom, once a land of peace, is suddenly beset by an onslaught of beasts, leaving the kingdom’s citizens unsure of what to do. Thankfully, a traveler known as Kirby steps up to protect the kingdom, and with Yellow Kirby, forms a squad known as Team Kirby to battle the monsters. While at the village, Kirby is told of a monster called Colossal Waddle Dee that is terrorizing The Grasslands, and Team Kirby is sent off on their first quest by Bandana Waddle Dee.

After Team Kirby’s successful defeat of Colossal Waddle Dee, Kirby arrives at the village and finds that a Shoppe has opened, and is run by a merchant named Magolor, who sells weapons and armor to Team Kirby in exchange for Fragments and Gem Apples. Additionally, a new member joins Team Kirby, who is known as Blue Kirby. Team Kirby then sets out to the Grasslands and The Dunes on more quests to defeat more monsters that are rampaging throughout the land. During their quests, a new member joins Team Kirby, and is known as Green Kirby. In the Dunes, Team Kirby sets out on a quest to fight Kracko, a beast who was causing so much trouble, that the quest was labeled as an ordeal. Eventually, Team Kirby defeats Kracko, but shortly after, more monsters colonize the Grasslands and the Dunes, and even a new area, The Ruins. On another ordeal quest, Team Kirby encounters Whispy Woods in the Ruins, who they successfully defeat. More monsters appear once again, and some quests even lead Team Kirby to The Volcano. There, in another ordeal quest, they fight and defeat Pyribbit.

After defeating Pyribbit, Team Kirby hears rumors of a mage who’s controlling the monsters to attack the Dream Kingdom, and that the mage is said to lurk in The Empyrean. After defeating more monsters throughout the kingdom, Team Kirby at last make their way to the Empyrean, where they fight the Guardian Angel, Landia. They then encounter the mage the rumors spoke of, and he is known as Taranza. Team Kirby defeats Taranza in hopes of stopping the horde of monsters, but even that did not quiet them down. The beasts continued to rampage, stronger than ever before, and Team Kirby heads out on more quests to defeat them. Their last quest leads them to the Decisive Battlefield, where they encounter the Guardian Angel once again, but he empowers himself and transforms into Landia EX. Regardless, Team Kirby defeats him once again, and restore peace to the Dream Kingdom for a short while.

A few days later, a dimensional rift suddenly opens in the Decisive Battlefield, releasing Parallel Susie upon the Dream Kingdom. Team Kirby sets out on a quest to defeat her, and afterwards, they encounter Parallel Landia in the Decisive Battlefield as well. It is then revealed that Taranza was the one who opened the dimensional rift, and he had faked his defeat in order to come up with a plot. As a last-ditch effort, Taranza summons the black mirror, and Dark Taranza emerges from its shimmering surface. After fighting with Team Kirby, Dark Taranza is defeated, and summons the black mirror as a last-ditch effort as well. King D-Mind then emerges from the mirror, and subsequently shatters Dark Taranza with his hammer. King D-Mind battles Team Kirby, but is defeated. However, he returns for another last battle with Team Kirby. Team Kirby comes out on top, and seals King-D Mind away in a far-off dimension in the black mirror, and then shatters the mirror with their magic.

With the mirror shattered, Taranza comes to his senses and is now free of the corruption of the black mirror’s dark magic, and becomes a member of the village. Team Kirby restores peace to the Dream Kingdom once and for all, and vow to suppress any threats if another were to arise.

However, the player can now win fragments (and, through certain Heroic Missions, Gem Apples, which are the game's currency) from battles as well. How often Team Kirby can go into battle is limited by how much vigor it has; if its current amount of vigor is too low, the player must either wait for it to restore itself over time, or spend two Gem Apples to restore it completely. Team Kirby's maximum amount of vigor can be increased by leveling up. If the player runs out of time during a battle, they can spend Gem Apples to give themselves 30 more seconds, and fully restore and revive Team Kirby. If all 4 Kirbys are defeated, then it is also possible to spend Gem Apples to revive all the members. The more they do this during a battle, however, the more costly it becomes.

Players can buy equipment and support items from Magolor at the Shoppe by spending fragments and Gem Apples there. They can also buy Gem Apples at the Shoppe using real-world money. Gem Apples can be earned without paying money through completing Heroic Missions and from Bandana Waddle Dee's tree, which can be harvested every 12 hours. This tree grows larger if the player purchases Gem Apples from the Shoppe.

The game also makes use of the 3DS' StreetPass feature. If the player passes by people who have played Team Kirby Clash Deluxe and selects "StreetPass Adventurers" on the Touch Screen, the other players' Kirbys appear in the village with whatever equipment they had at the time, and can join Kirby in battle a maximum of three times. Alternatively, the player can select "Wandering Adventurers" and connect to the Internet to achieve the same effect. Wandering Adventurers can be summoned for free once a day. After that, five Gem Apples are required.

The game gives the player the option to scan amiibo; doing so rewards the player with fragments. Additionally, entering a password at the Shrine of Passwords allows the player to earn extra rewards.

All enemies in the game are used in boss attacks. 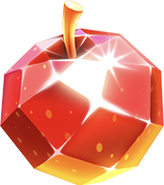 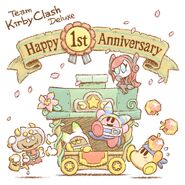 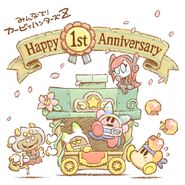 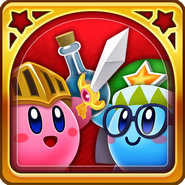 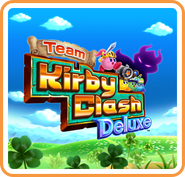 The completed Quest Board.