There are four stats for members of Team Kirby that may be leveled up: 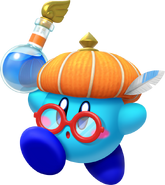 The player forms a team online.
Community content is available under CC-BY-SA unless otherwise noted.
Advertisement