Taranza is a major character and the former secondary antagonist of Kirby: Triple Deluxe. A spider-like character who kidnaps King Dedede in the opening cutscene of the game, Taranza initially appears to be the main antagonist; however, he is ultimately revealed to be a misguided servant/unwitting pawn of a much more sinister villain, Queen Sectonia. He is never fought directly in the game, instead affecting other bosses in order to make them fight Kirby.

Taranza is a floating, limbless creature a little over Kirby's height. He has a brown head topped with two yellow-tipped horns, as well as silver, curvy hair; additionally, his mouth contains two fangs. On the front of his hair, Taranza has two orange eyes, two white eyes below those, and four more eyes on the back of his head. He wears a red scarf and a dark green cape with a spider-web design. The clothing on his body has two sets of white buttons on its front, and red circle designs on either side. Finally, Taranza has a stinger-like appendage on his bottom and six white and orange gloved hands.

In Team Kirby Clash Deluxe, Taranza now dresses in a red and purple color scheme due to being corrupted by the black mirror. His cape and clothing are now black. The spider-web design on his cape is now red, and his horns are purple with red tips. He now dawns a purple scarf and white and red gloves. The buttons on his clothing are now yellow, and the circle designs have changed to purple. When the player has completed the game, Taranza will revert back to his original design.

Taranza is shown to be very resourceful, as he often uses his magic to turn objects into monsters, control other beings, or simply agitate them and pin the blame on Kirby to stop him from getting in his way. After Queen Sectonia’s demise, Taranza was overcome with minor grief. This is shown in a few pieces of the official Twitter artwork, where he is seen associated with things reminiscent of Queen Sectonia, as well as in Team Kirby Clash Deluxe, where he is seen holding a flower reminiscent of Queen Sectonia’s flower form. Despite this, Taranza still lives happily and peacefully, such as when he sits atop Magolor’s Shoppe in Team Kirby Clash Deluxe, sniffing the flower and twirling around its petals while smiling. His pause screen description in Kirby Star Allies states that he is clumsy and that he is a bit of a smarty-pants.

In the past, Taranza and Queen Sectonia had a very good friendship, his Weapon description in Team Kirby Clash Deluxe states that he even had feelings for her, but never admitted them. However, Queen Sectonia became evil after being corrupted by the Dimension Mirror that Taranza presented to her. She used her beauty to intoxicate Taranza into doing her bidding. This influence was seemingly broken when Sectonia attacked Taranza. Realizing Sectonia was a danger to everyone; servants, subjects, and opposers alike, Taranza aided in taking down his former queen. He later tried to call out to help Soul of Sectonia, but his voice didn't reach her due to her insanity and desire for power.

In Kirby: Planet Robobot, it is revealed that Queen Sectonia was once of the same species as Taranza prior to her possession of a new body.

The morning after the Dreamstalk lifts Kirby's house and Castle Dedede into the floating kingdom of Floralia, Taranza enters the king's castle, easily dispatches several Waddle Dee guards, and captures King Dedede. He flees the castle with the king in tow, and heads higher into Floralia, followed by Kirby climbing the Dreamstalk in pursuit.

Throughout Kirby's journey through Floralia's six worlds, Taranza attempts to impede his progress by creating or aggravating bosses. He uses spider web-like magic to turn inanimate objects to life, such as a flower into Flowery Woods, a cloud into Kracko, and a stone statue into Coily Rattler. On the other hand, he spins Paintra's painting and throws a rock at a sleeping Pyribbit, aggravating both into confronting Kirby. Kirby continuously defeats the bosses and pursues Taranza, intent on saving King Dedede.

Unbeknownst to Taranza, Kirby manages to save the People of the Sky from their cages at Royal Road. With their help, he then follows Taranza and King Dedede into a castle. As Kirby enters, Taranza notes Kirby's persistence, and says he cannot allow Kirby to interfere with Queen Sectonia’s plans. He correctly guesses that Kirby followed him in order to rescue Dedede, whom he calls "the hero of the lower world." He briefly explains that the People of the Sky thought they could use the Dreamstalk to save their world, but he saw right though their plan. He then takes control of Dedede, turning him into Masked Dedede and forcing him to attack Kirby. Kirby defeats King Dedede, breaking his hammer and part of his mask in the process, but Taranza revitalizes him with a stronger dose of his magic. Despite this frenzied state, Kirby defeats the king a second time, and the rest of his mask is destroyed, breaking Taranza's control permanently.

Taranza approaches the unconscious Dedede, confused how he had lost, as he followed his queen’s orders. He then realizes Kirby is really the hero of the world below. Then, out of desperation, he quickly summons Queen Sectonia, hoping she'll save him. Displeased with his failure and deeming him useless, Sectonia immediately blasts Taranza with a laser, sending him flying out of the castle and into the distance.

After Kirby defeats Sectonia, in her base and fusion with the Dreamstalk, he is caught off guard and ensnared by one of her vines. Before she can squeeze him to death, Taranza reappears to help. Carrying Dedede, he throws his former captive, who smacks Kirby free of the vine's grip. Dedede then throws Kirby to Taranza, who gives Kirby a Miracle Fruit. Hypernova Kirby then takes on and defeats Sectonia for the seemingly final time by firing back her own laser and vaporizing her. Afterwards, the vines rapidly disintegrate, and Kirby and Dedede plummet from the sky. The People of the Sky catch Kirby and his house, while Taranza catches Dedede with minor struggle. Taranza, Kirby, Dedede, and the People of the Sky then admire the fully-bloomed Dreamstalk.

It is not known whether Taranza returned to Floralia or stayed in Dream Land with King Dedede and Kirby, but it can be assumed that he has the ability to travel between the two lands using the Dreamstalk.

In the distant past, a faraway place called the Dream Kingdom is beset by enemies. After Kirby and his team defeat Kracko and Pyribbit, they hear rumors of a mage who invigorates enemies to attack, who turns out to be Taranza. They defeat him, but enemies continue to cause trouble. Team Kirby sets out to defeat Landia EX, the latest threat, and peace is restored after their victory.

A few days later, a dimensional rift opens unexpectedly, releasing Parallel Susie. Team Kirby conquers her and Parallel Landia, and learns that Taranza was the one who conjured the rift. The mage summons the black mirror and Dark Taranza, who in turn summons the king of darkness, King D-Mind. This villain destroys Dark Taranza and assaults Team Kirby. The heroes challenge him and defeat him. However, King D-Mind returns for a second time, but Team Kirby defeat him again, this time Sealing him in the black mirror and shattering it, trapping the king in a sealed-off dimension.

With the mirror shattered, it is revealed that Taranza was corrupted by the mirror’s darkness. He comes to his senses and becomes a passive member of the village. Peace returns to the Dream Kingdom and Team Kirby vows to suppress any threats that should emerge.

For the first time in the series, Taranza is fought directly. After being unlocked for 35 Gem Apples, the battle takes place in the Empyrean. He is an Ordeal boss in the Tough category and must be defeated before the player can access the Decisive Battlefield. His magical attacks include firing energy orbs, throwing a giant bouncy orb, firing jewels from the background, dashing across the screen in an energy bubble, and creating a large explosion around himself. He teleports frequently to dodge attacks and assault Team Kirby from different angles. Finally, Taranza uses energy nets to trap the Kirbys.  He flies into the background, throws the net, and any Kirbys hit by it will be immobilized. To free the trapped Kirby, the others must attack the net until it breaks (or if the player is trapped, mash the +Control Pad). If not done fast enough, the net will shrink around the trapped Kirby and then explode, dealing massive damage. If the net is broken, however, Taranza will be launched onto the ground, temporarily stunned.

Taranza is not fought again, but his black mirror counterpart, Dark Taranza, uses the same techniques. He is fought in the Decisive Battlefield.

After King D-Mind's defeat, Taranza becomes a resident of the village, occupying the roof of Magolor's Shoppe. His color scheme changes from purple and pink to his traditional one, indicating the end of his curse.

Taranza appears in the audience in the Coin Clash mode in the Party Room stage. He can be seen at the top right.

Taranza returns as a Dream Friend in Kirby Star Allies looking to make a bid for the altar in The Divine Terminus in order to reach out to a "bright light" which is implied to Sectonia. However, it is also stated that he is in search of Sectonia, even though she perished after being vaporized. This implies that Taranza is unable to let go of Sectonia, and still believes that she is out there somewhere. He uses abilities based on his Team Kirby Clash Deluxe boss fights. as well as new ones based on the Spider abilty.

Taranza is shown to be a skilled wielder of magic. He can fire purple balls of energy, possess and strengthen other beings, and use a web-like net of energy to capture and carry others. When possessing King Dedede in Kirby: Triple Deluxe, Taranza uses magical strings attached to Dedede's limbs to control him like a puppet.

In Team Kirby Clash Deluxe, where he is fought directly, Taranza uses magic to fight, primarily in the form of energy orbs.  Aside from those attacks, he can surround himself in a damaging barrier to ram into the Kirbys, trap them with an explosive energy net, or teleport rapidly around the screen.

Taranza's name is derived from tarantula, the species of arachnid that he is based on.[2] 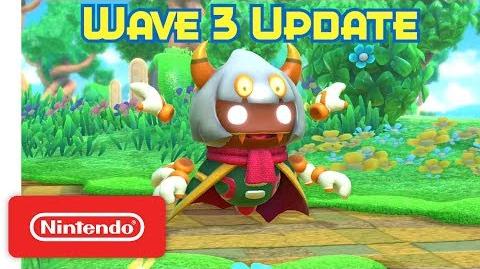 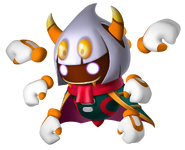 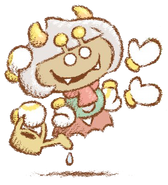 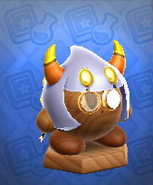 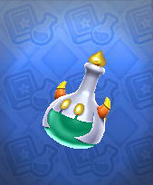 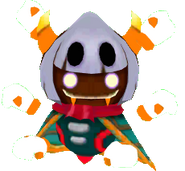 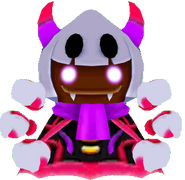 Retrieved from "https://kirby.fandom.com/wiki/Taranza?oldid=305048"
Community content is available under CC-BY-SA unless otherwise noted.