TAC (originally T.A.C.) is an enemy in the Kirby games. He is a cat-like burglar dressed in a ninja outfit and carries around a bag of stolen goods. TAC first appeared in Kirby Super Star as an enemy and a Helper. He is currently the only source of the rare Copy ability. As such, TAC is also the Helper for the Copy copy ability.

TAC appears as a common enemy in these games. He will run around and will attempt to steal Kirby's copy ability (or kidnap his Helper). TAC then attempts to flee from the scene with the stolen copy ability/helper. If Kirby chases after him and slays him, he will get his copy ability/Helper back. But if he doesn't catch him in time, he will leave the area with the copy ability/Helper he stole. He may occasionally (but very rarely) fly away as his escape method instead of running away.

TAC, along with Bomber are the only enemies to inhabit the planet ???.

As a Helper, TAC differs greatly from Kirby with the Copy copy ability. Whereas Copy Kirby projects a beam to analyze and copy an enemy's power, TAC swiftly thrusts his hand forward in an attempt to obtain a power. As for his guard, TAC camouflages his body to blend in with the background. Doing so negates virtually any attack used against him. In Helper to Hero, TAC wears a white garb and carries a reddish sack.

Ironically, TAC as a Helper is more versatile than Kirby with the Copy copy ability, or any other Helper for that matter. This is because TAC can use "Steal" (Tap B) and "Cat Magnum" (Hold B), which causes TAC to take on the form of the corresponding Helper for the copy abilty of the enemy he used the move on, as well as damage the enemy, though note that when this transformation occurs, there is a "?" on the Helper's icon. This means the Helper can discard this Copy Ability and revert back to regular TAC.

TAC appears in Kirby Air Ride as an Event in City Trial Mode. When the event is activated, TAC will appear with stolen goods, mainly food and Patches. Running into him will cause him to drop the items before running off. In most cases, TAC appears under the city. Unlike most events, he does no damage if he collides with Kirby. TAC blasts off like a rocket when the event is over, and leaves behind a very useful "All" Patch that can be collected.

Also, there is a challenge on the checklist where Kirby has to steal 8 items from him. 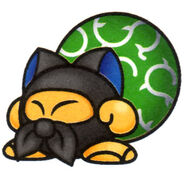 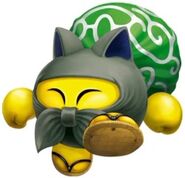 Kirby Super Star Ultra
Add a photo to this gallery
Retrieved from "https://kirby.fandom.com/wiki/Tac?oldid=71006"
Community content is available under CC-BY-SA unless otherwise noted.