Regular enemy
Swordory is an enemy in the Kirby series, debuting in Kirby's Return to Dream Land. It yields the Sword ability when inhaled.

Swordory is an animated sword with a brown hilt, a small pair of blue wings, and a single blue eye in the middle of its handle.

Swordory debuts as an enemy in this game, first appearing in Onion Ocean in the main game or the Sword Challenge in the Lor Starcutter. When Kirby approaches Swordory, it will wind up and then release three quick slashes in an attempt to hurt the pink puffball. Occasionally, Swordory will use a secondary attack, lunging toward the player with a quick thrust.

Notably, large groups of Swordorys appear in the Sword Challenge.

Swordory appears in the New Challenge Stages in this game. It appears in the Sword Challenge, the Fighter Combat Chamber, and Magolor Race 1. Swordory's behavior has not changed since Kirby's Return to Dream Land.

Swordory is not present in the main game, and instead only appears in Stages 3 and 4 of the Dedede's Drum Dash sub-game. Here, whether or not King Dedede is close by, it slashes through the air in a repetitive fashion. Swordory also appears in the downloadable Dedede's Drum Dash Deluxe with the same behavior and purpose.

Swordory's name is derived from the word sword, referencing its design. 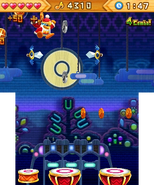 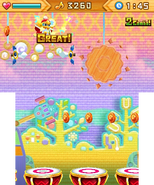