Sword Knight is an enemy character in the Kirby series who gives the Sword copy ability when eaten. He also appears in Kirby: Right Back at Ya! as an ally and a servant of Meta Knight.

Sword Knights first appeared in Kirby's Adventure for the NES. Here they try to cut Kirby with their swords and can also block most projectiles thrown at them. Kirby gets the Sword ability when he swallows one. Blade Knight, a similar foe, also makes his first appearance in this game. Both knights behave the same way.

In Kirby Air Ride, Sword Knights return riding on hoverboards. Once a Kirby gets close to one, it will swing its sword wildly at him until he passes. Unlike most enemies in the game, Sword Knights rarely appear in large groups. At most two or three might appear to gang up on Kirby.

Sword Knight appears as an enemy in this game, but only in Revenge of the King, where he replaced Blade Knight. Sword Knight blocks projectiles and is a lot more aggressive than Blade Knight. As usual they give the Sword ability however Kirby can't call on Sword Knight to be a helper, he can only call for Blade knight.

A Sword Knight also appears in Helper to Hero with orange armor and a blue and red torso and unlike Blade Knight, can use an upwards-thrust attack.

In many games, Sword Knight appears as the main source of the Sword ability. They appear primarily on handheld systems such as Kirby & the Amazing Mirror and Kirby: Squeak Squad, and their tactics remain the same as they did since their debut in Kirby's Adventure. To date, their only appearances on a 3D game has been Kirby Air Ride and Kirby: Return to Dream Land.

Sword Knight (simply called "Sword" in the anime) is one of Meta Knight's servants. He and Blade Knight tried to rob Meta Knight, but Meta Knight rescued them from the monster WolfWrath. Also seen in this flash-back, he is wielding a mace, a possible reference to Mace Knights. He speaks normally in the Japanese dub and English version, although for some reason Blade Knight does not. In the English version, Sword Knight also speaks with either a British or Australian accent. 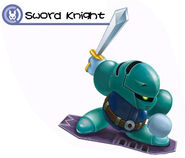 Kirby Super Star Ultra (Helper to Hero)
Add a photo to this gallery
Retrieved from "https://kirby.fandom.com/wiki/Sword_Knight?oldid=124275"
Community content is available under CC-BY-SA unless otherwise noted.