In the Kirby series, the player must activate switches for various functions. To activate a switch, Kirby must step on it or attack it.

In these games, switches were big buttons used to unlock secret areas in the level they were found in. Once Kirby activates a switch, they vanish for the remainder of the game. In Kirby's Adventure, the switches are color-coded: Red Switches unlock Arenas, Green Switches unlock Sub-games, Blue Switches unlock Museums, and Yellow Switches unlock Warp Star Stations.

In these games, there were more of the switches found in Kirby's Adventure. Also introduced were small switches that open mechanical doors that block Kirby's path. These small switches can only be pressed-on for a certain amount of time- so Kirby must move quickly- or in some cases, solve a puzzle that is even more complex. An example of a more complex switch puzzle is the one in The Great Cave Offensive, where the player must press a series of switches in the right order to get the treasure.

In this game, switches lose their distinctive, star look and now look more like buttons or toggles. They appear in some levels, where any number of them must be pressed down to open doors or move Blockbots. If the player takes too long trying to press all the switches, they will pop back up and will have to be pressed again.

In this game, big switches are pressed to place a door; leading to the world they're pressed in at Rainbow Route. If the player hits every big switch, a golden door will appear in Central Circle. This door leads to a room containing almost every Copy Ability in the game.

In addition to small switches, there are three big switches within the stages – an orange one in Rift Ruin, Iello Adventure; a green one in Cold Course, Bloo Hills; and a blue one in Frozen Fantasy, Wonder Lilane. There are also several blocks in the same three colors, that usually block Kirby off from medals. Pressing a switch flattens it for the rest of the game, and destroys all the aforementioned blocks of the corresponding color.

A switch is also drawn in Paint Panic.

In this game, switches sometimes stay down after pressed and therefore leave any doors they trigger open. Some open doors to areas containing Treasure Chests and may keep them open for only a limited time, adding a challenge to obtaining the chest.

In this game, a big switch appears as a sticker using its artwork from Kirby: Nightmare in Dream Land. The sticker can be applied to anyone and increases Launch Resistance by 18.

In this game, switches are less common and look like pedestals; these switches require more work to push down. The player must make the Kirbys jump on it and push it into the ground. These switches do things like opening up blockades and releasing bomb bricks. The Kirbys also push these down in the intro to each level. Other switches called Melody Switches are seen in the game.

Additionally, there are three exclusive switches only found in Stage 10 of Dedede Resort. There's a red switch, a blue switch, and a green switch. The Kirbys must uncover the order to hit these switches in. When the player hits them in the correct order (which is red, green, blue, green), a blockade disappears, allowing the Kirbys to enter a secret room. This room contains a medal.

In these three games, switches' functions are differentiated by color; blue switches stay permanently pressed after Kirby touches them, while pink switches pop back up shortly after being pushed. The pink switches' effect on any given object is temporary, and they are reusable. Switches can trigger gateways to open, cause blocks to break and/or appear, and reveal doorways or collectibles that would have otherwise been hidden. Some switches come in the form of handles hanging from ceilings, including a special, new purple one that acts like a toggle switch. Despite being made out of copper and having stripes based off of their type in Kirby's Return to Dream Land, in Kirby: Triple Deluxe and Kirby: Planet Robobot, these handles greatly resemble ordinary switches.

Switches serve their typical purpose by opening gates when pressed. A big switch appears inside Bastron on both occasions when Kirby enters it. Pressing the big switch causes a self-destruct sequence to begin, which Kirby Rocket and Elline must quickly escape from. 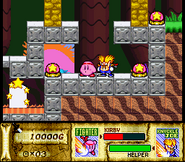 Kirby and the Rainbow Curse (big)