Old: A blue plain ribbon and slightly dark tan skin.
New: A blue headband with a brown leather like patch that has two small gold stars on each side and a gold medal depicting a trophy with a star on the very front.

Suplex is one of the hardest abilities to obtain, as it cannot be found by inhaling a common enemy, but only from certain mid-bosses. It is only obtained from Bugzzy, Jukid, or occasionally Phan Phan. Bugzzy is the helper of Suplex. The attacks feature Kirby dashing forward and grabbing any enemy he bumps into, and delivering a massive blow to it. Also, any objects in the way of any throw from the Suplex ability will instantly be destroyed or damaged. Kirby is invincible once a target is grabbed and will retain this state until the internal timer runs out, in which Kirby will automatically do the rising-break throw (B throw).

Almost all of Suplex's moves are grabs and can only be performed to an enemy, certain boss projectiles, stars, and a defeated mid-boss, but not to bosses. Pinpoint Kick is actually Suplex's only move that isn't a grab, making it moderately effective against bosses and mid-bosses while Kirby waits for a projectile to be thrown. Kirby's path when throwing anything becomes a hitbox against bosses, allowing the player to direct Kirby's attack.

Many of Suplex's moves, particularly the forward and backward throws and the Fury Stomp are used when Kirby throws an enemy in the Super Smash Bros. series. The only exception is his up throw, which seems to be based on Ninja's Throw. Meta Knight's down throw is also the Fury Stomp.

Suplex is named after a wrestling technique that involves lifting and throwing an opponent, a suplex. 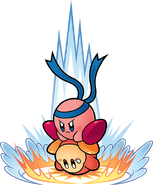 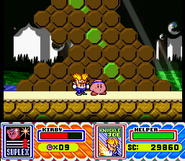