Consumption of Superspicy Curry gives Kirby the ability to spit fire pellets at enemies for a limited time.[2] The effect also ends when Kirby is exposed to water.

Superspicy Curry appears as an item in the Kracko Land Bonus Game. It is worth 2000 points when eaten.

Superspicy Curry makes a cameo appearance in the Kirby Quest sub-game of Kirby Mass Attack, being used as one of Kirby's "Awesome" attacks. It inflicts damage on all enemies. This appears to be the Kirby: Right Back at Ya! equivalent of the dish, as it has an identical appearance and effects.

The Superspicy Curry appears in Kirby: Triple Deluxe as a collectible keychain.

Superspicy Curry makes a cameo appearance in The Ultimate Choice when the player selects a difficulty.

In Kirby: Right Back at Ya, Superspicy Curry appeared in the episode The Hot Shot Chef / A Spice Odyssey, here being referred to as Toxic Atomic Curry. It was created and first tasted by Chef Kawasaki during a "cooking war" between Kawaski and King Dedede's latest monster, Monsieur Goan. When Kirby fought the beast, he was unable to defeat it as Cook Kirby and was trapped in a bowl of ice. Before Kirby froze, Kawasaki tossed him some of the curry, which melted the ice and broke the bowl. Kirby started to spew flames all around. Tuff was delighted that Kirby had changed to Fire Kirby, but Meta Knight explained that it was only the curry being so spicy that even Kirby couldn't handle it, much to Kawasaki's delight. Kirby defeated the monster by breathing fire onto it and setting fire to the building they were in. At the end of the episode, Dedede and Escargoon were forced to eat it as punishment for the incident, and they literally burned to a crisp after they did so.

Superspicy Curry also appears in Super Smash Bros. Brawl, Super Smash Bros. for Nintendo 3DS and Wii U, and Super Smash Bros. Ultimate. When picked up, the user is then able to attack as usual, albeit with flames constantly erupting from the user's mouth. It is different from the Fire Flower item because the flames of the curry are constantly coming out, even while performing other attacks (excluding grabs and Kirby's/King Dedede's inhale moves). This item causes a complete status change rather than just being used as a weapon. Like many other items, it has its own trophy.

"Curry" is also a mode in Special Brawl, which gives all players a permanent "Curry" status. 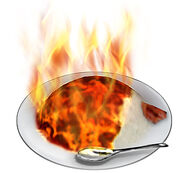 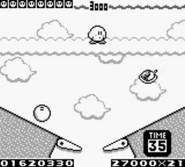 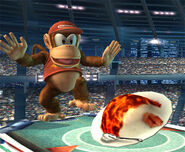