Super Waddle Doo can be distinguished from its similar cousin with subtle differences: a bright yellow star above its eye; a spiked ring around its eye; a darker skin hue; longer, thicker hair strands on its head; pointed feet; and lastly, a multicolored aura surrounding it while it sparkles.

Super Waddle Doo is first introduced in Raisin Ruins. Its attack is identical to Waddle Doo's; it walks around and slowly flails a Beam Whip, even if Kirby has not approached. This enemy is no more powerful, aggressive or durable than his normal cousin. 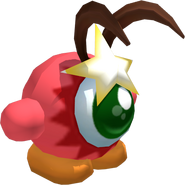 Kirby's Return to Dream Land
Add a photo to this gallery
Retrieved from "https://kirby.fandom.com/wiki/Super_Waddle_Doo?oldid=329104"
Community content is available under CC-BY-SA unless otherwise noted.