Wii
Super Smash Bros. Brawl is the third installment of the Super Smash Bros. series. It was due for release December 3, 2007 on the Nintendo Wii in North America. However, it was delayed and was eventually released on March 9, 2008.

Following its predecessors, Super Smash Bros. Brawl uses a battle system unlike that of typical fighting games. Players can choose from a large selection of characters, each attempting to knock their opponents off the screen as they fight on various stages. Instead of using traditional health bars that start at 100% and lose value, Super Smash Bros. Brawl characters start the game with 0% and the value rises as they take damage. However, damage will continue to increase beyond 100%, up to 999%, because it's impossible to be defeated in this way. As a character's percentage increases, the character flies farther back when hit. When a character is knocked beyond a stage's boundary and disappears from the screen, the character loses either a life or a point depending on the mode of play. Super Smash Bros. Brawl includes a function which allows players to create profiles with personalized button configurations for each control method along with their chosen username.

The characters fight each other using a variety of attacks. Players execute each move by pressing a button in conjunction with a tilt of the control stick or a press of the +Control Pad, depending on the mode of control. In addition to basic attacks, characters have access to more powerful moves, known as smash attacks. Each character has four unique moves, which often cause effects besides damage to an opponent. Super Smash Bros. Brawl introduces the ability to perform character-specific super attacks, referred to as "Final Smash" moves. Significantly more powerful than regular attacks, these moves have a wide variety of effects that range from nearly unavoidable blasts to temporary transformations. Final Smash moves may be performed upon destroying a Smash Ball, an item bearing the Smash Bros. insignia.

Characters can use items ranging from projectiles to melee weapons; each has a different effect on the characters around it. Although many items have returned from previous Super Smash Bros. games, new ones have been introduced as well. Some returning items have changed appearance and function. Two varieties of items, Assist Trophies and Poké Balls, temporarily summon guest characters and Pokémon, respectively, that generally aid the summoner. They cannot be controlled by players and are usually invincible.

In addition to the standard multiplayer mode, Super Smash Bros. Brawl features other multiplayer modes and options in Group mode. Special Melee from the previous game returns as Special Brawl. In this mode, players are able to battle in matches using special rules for a greater level of customization. Whereas previously standard options such as Giant Melee or Invisible Melee were limited to one feature per match, players may now select multiple options for a single match. Another returning game type, Tourney mode (formerly Tournament mode), enables players to create an elimination-based tournament with a large number of game-controlled or human-controlled opponents. The Rotation feature has been introduced in Super Smash Bros. Brawl, which allows up to 16 players to compete in sequence by switching out winners or losers after each round.

Like its predecessors, Super Smash Bros. Brawl includes various modes of play from the previous game designed for a single player. Classic Mode, as the name implies, is a classical approach to the game, in which players fight individual characters in a selected order. Each match features an arena or opponent from a particular series, such as The Legend of Zelda or Pokémon. Several matches have a unique battle condition, such as a metal opponent or a two-on-two team battle. Similar to Classic Mode are All-Star Mode and Boss Battles, where the player has only one life to defeat all of the playable characters and bosses, respectively. Boss Battles is similar to Boss Endurance from the Kirby games, while in All-Star, if the player loses, the option to start from the beginning of the lost battle is present.

Super Smash Bros. Brawl features Events, which are matches with predetermined battle conditions such as defeating opponents within a time limit or reaching a specific goal. New to single-player mode, each of the 62 Events has three difficulty levels, with a distinct high score recorded for each. In addition to the normal set of 41 Events played with a single player, a smaller set of 21 two-player Events is included.

Stadium mode is a collection of objective-oriented minigames, or small games within the game. Returning from the two previous games is the Target Smash! minigame, in which the player must break 10 targets as quickly as possible. Additionally, items scattered across the stage are available for use. In the Home-Run Contest, the player must beat Sandbag to inflict as much damage as possible in 10 seconds, then strike it with a Home-Run Bat. Updated from Super Smash Bros. Melee, all Stadium mode minigames feature cooperative or competitive multiplayer.

The Subspace Emissary mode is a side-scrolling adventure in the style of a platformer, inspired by the Mario and Kirby games. However, it retains all basic mechanics of Super Smash Bros., such as a damage meter, stocks and Smash Bros.-style attacks. The mode features a world map where stages are selected; once a stage is selected, the difficulty can be chosen, and the character(s) will enter the stage. The selectable characters will change depending on the plot; a character selection screen has been shown, but it is not clear whether the characters are chosen before selecting a stage or after. According to various movies shown at E for All, if the player follows the plot without exiting the Adventure Mode, the screen will sometimes freeze and the characters on screen can be selected. For example, when Mario, Peach, Zelda, and Kirby prepare to battle the Subspace invaders in the Midair Stadium, the cinematic will freeze and the player can choose between any of these four characters with a cursor.

Super Smash Bros. Brawl allows the player to select between 35 characters. Some can transform into alternate forms, with different move sets and play styles. Some are new, but others return from Super Smash Bros. Melee—in some cases they are updated or refined, either in appearance, fighting capabilities, or both. For example, Link and Fox have adopted designs from more recent titles, while Samus has gained the ability to change into a new form, Zero Suit Samus.

Some previously represented series have had more characters added to Super Smash Bros. Brawl. Diddy Kong from the Donkey Kong series and Ike from the Fire Emblem series make their first appearance in the Super Smash Bros. series. Other newcomers are the first to represent their series. These include characters such as Pit, representing the Kid Icarus series for the first time since the 1991 Game Boy game Kid Icarus: Of Myths and Monsters, and Wario, from Nintendo's WarioWare series and an occasional antagonist of Mario's. Solid Snake, the main protagonist of Konami's Metal Gear franchise, and Sonic the Hedgehog from Nintendo's former rival SEGA are the first third-party characters to appear in a Super Smash Bros. game.

Here is a list of all stages in Super Smash Bros. Brawl. Using the new custom stage feature, the player can create a stage to fit his/her criteria. There are also stages that return from Melee.

Music from several Kirby series games appears for the stage Halberd, and some music returns from Super Smash Bros. Melee for Green Greens. Songs listed in bold must be unlocked

Stickers are items that can be found in multi-player or solo modes. Each sticker depicts a character or item from a specific series. They are also used as power-ups on occasion in the Subspace Emissary. 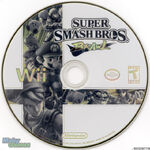