Super Hot Head is an enemy in the Kirby series, debuting in Kirby's Return to Dream Land. It is a special variant of Hot Head. It is the only enemy to yield the Monster Flame ability when inhaled.

Super Hot Head looks similar in appearance to an ordinary Hot Head, but with a few distinct differences: It has a large star on its forehead, an angrier expression, brighter colors, patterns below its eyes, a more intense flame, and a multicolored aura surrounding its sparkling body.

Super Hot Head first appears in Cookie Country. Its attack is identical to Hot Head's; it spews a jet of flame from its mouth when Kirby approaches. This enemy is no more aggressive or durable than its normal counterpart. 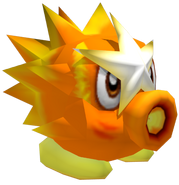