A Super Ability is a time-limited ability in Kirby's Return to Dream Land. There are five different super abilities available, all of them being more powerful than their regular Copy Ability counterparts, and they only last for about 2-3 minutes before expiring. Each ability causes Kirby to pulsate with purple tendrils of energy, as well as adding a glowing star marking the upgraded version of the Copy Ability's hat.

Super abilities can only be acquired by inhaling "Super" versions of regular enemies, which are characterized by a pulsing yellow aura, a glowing star on the forehead and slight differences in design. There are no Copy Essences for super abilities.

Outside of boss fights and special mid-boss sequences, the primary goal of using the Super Abilities is to reveal interdimensional tunnels hidden within special terrain which can only be destroyed while having the super ability, before it expires. Despite their immense power, there are many limitations concerning super abilities. For one, if Kirby were to drop the Super ability star for any reason, it shatters instantly instead of bouncing about for a few seconds like regular ability stars. They are lost if Kirby goes through the final door, if he goes into an interdimensional tunnel, or if the player cancels the level. It is also impossible to keep the super ability star within Kirby's mouth in an attempt to extend the time it lasts - Kirby swallows the super enemy the moment he inhales it. In multiplayer mode, only one Kirby can have a Super Ability at any time. Although the enemy giving the super ability spawns multiple times, any other Kirby who inhales one of them causes the first Kirby to lose his super ability.

Each Super Ability has a Copy Ability counterpart. 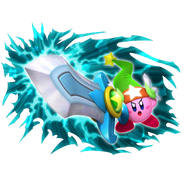 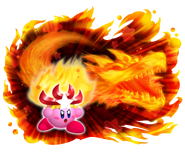 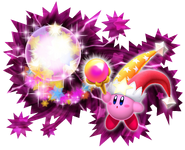 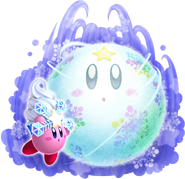 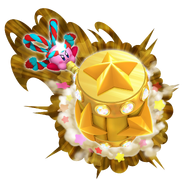