Restores five health; is stored as a collectible
Strawberry Shortcake is Kirby's slice of cake central to Kirby: Squeak Squad as a plot device. Kirby had to investigate its disappearance before he could eat it, and he ended up traversing the whole of Planet Popstar and out into Gamble Galaxy before finally retrieving it.

At the start of Kirby: Squeak Squad, Kirby is relaxing, about to eat his Strawberry Shortcake when it is stolen by an unidentified thief. Although he initially thinks the culprit was King Dedede, he later finds that the Squeaks were responsible. Kirby follows the Squeaks throughout most of Popstar, before finally defeating their leader, Daroach. Just before he can open the chest that supposedly contains his Strawberry Shortcake though, Meta Knight appears from nowhere and snatches the chest. Kirby, infuriated, chases after Meta Knight to his secret base at Secret Sea. Once he defeats Meta Knight, Kirby was about to open the chest thinking his Strawberry Shortcake was in there, only for the chest to be stolen and opened by Daroach, only to find out a great and powerful evil was hidden in it, possessing Daroach and quickly escaping the Halberd, taking up refuge in a black hole it opened. Kirby manages to defeat Dark Daroach and Dark Nebula, although he never recovered his Strawberry Shortcake. After the credits of the game, the Squeaks return the shortcake as an apology for the trouble they caused.

After beating the game, the cake appears on the treasure screen as an icon. If selected, it shows a picture of the cake. It has no purpose otherwise, though, besides adding a treasure to Kirby's total.

The Strawberry Shortcake has also played a role in other Kirby games, either appearing as a cameo or a type of consumable item. In Kirby Tilt 'n' Tumble, it appears as a consumable item that restores five Vitality, and it makes an appearance in Kirby 64: The Crystal Shards during a cutscene in which Kirby eats one. In Kirby Super Star Ultra, it appears in the Snack Tracks sub-game as one of the foods traveling on the conveyor belts. In Kirby Mass Attack it appears in the Fishing Pond sub-game: it's one of the items that Kirby has the chance to fish. It also appears in Kirby's Return to Dream Land during the opening cutscene. King Dedede and Bandana Waddle Dee are chasing Kirby to take the Strawberry Shortcake from him when, upon the Lor Starcutter's crash landing, Kirby drops the cake and is momentarily distracted by his ruined snack. The Strawberry Shortcake also makes a cameo in Kirby Battle Royale. If Sleep Kirby stands idle for long enough, he falls asleep and begins recovering health. This is illustrated by Kirby's dream bubble, which shows a slice of strawberry shortcake being steadily eaten, similarly to Kirby: Squeak Squad’s idle animation in the overworld: if the player is inactive, Kirby falls asleep after a while, dreaming about the shortcake. 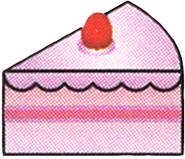 Depicted as a cupcake on the official US website 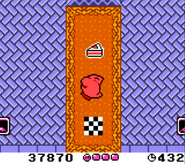 Kirby dreams about his lost shortcake. 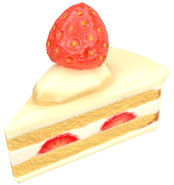