Storo is a member of the Squeaks, debuting in Kirby: Squeak Squad. Due to his giant size and immense strength, he acts as the muscle of Daroach's gang. He is also more durable than Spinni and Doc.

Storo is a blue, bulky, bipedal mouse-like creature. He wears a red bandana and a red sleeveless shirt, but does not wear clothing anywhere else. He has a mouse-like face, with a circular, black snout, a single tooth extending out of his mouth, and large ears. Both of Storo's eyes are concealed by the bandana, in addition to the eyepatch he wears on his left eye. Finally, Storo has a navel, two arms and hands, two stubby feet with three toes each, and no tail.

Not much is known about Storo's personality, but in the sub-game Speedy Teatime in Kirby: Squeak Squad, Storo is shown to be greedy & gluttonous, evidenced by the fact he smiles when eating more than Kirby (and when winning), and cries when losing. Storo seems to be a sleepy character; after taking enough damage, Storo may temporarily fall asleep (signaled by the snot bubble), and on the file select screen, all he does is walk around and occasionally fall asleep.

In Kirby Mass Attack, Daroach says that Storo may look like a brute, but is instead "a pussycat."

Storo appears in certain levels whenever Kirby collects a large Treasure Chest. He tries to steal the chest back from Kirby, but due to his large size, he only walks slowly. When Storo is directly facing Kirby, however, he will pause for a moment before smashing the ground with his hammer, creating stars for Kirby to inhale. He also attacks by periodically jumping forward in a low arc, which also creates stars that can be inhaled. Whenever Storo successfully hits Kirby or walks into him, Kirby will lose one of the Treasure Chests he has collected, giving Storo a chance to steal a chest and take it back to a nearby hideout. As with the other Squeaks, Storo is weak against fire, electricity and ice attacks, and drops what is presumably stolen food when hit. Storo features in the sub-game Speedy Teatime, where he competes with Kirby to eat the most cake while avoiding the bombs. He is also depicted in a graphic, which Kirby can assemble by collecting Graphic Pieces from Treasure Chests.

Storo appears in Daroach's Airship after the Kirbys defeat Whispy Woods and clear Green Grounds. He cannot be interacted with, and he only stands still in the left side of the area.

Storo appears in Kirby: Triple Deluxe as a keychain.

Storo appears in Kirby: Planet Robobot as a sticker.

Storo can be summoned by Daroach to have him jump up and slam down three times with his bulk.

Storo's name comes from the word strong, referencing his role in the Squeaks as "the muscle." 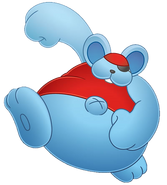 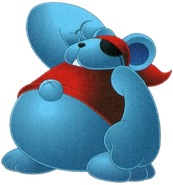 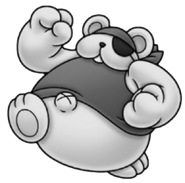 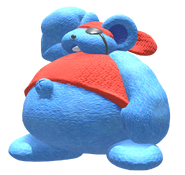