Transforms into a mobile statue

Stone + Stone (also called Giant Stone Kirby[1] or Walking Statue[2]) is a Power Combo in Kirby 64: The Crystal Shards obtained by mixing two Stone abilities. The ability allows Kirby to turn into a giant golem. He is invulnerable in this form, but he cannot jump. If Kirby stands on a slope, he will roll down, defeating any enemy he touches. Pressing the attack button while Kirby is a golem will cause Kirby to return to normal, leaving behind a blast of smaller rocks around his body, which can defeat enemies and is effective against bosses. It is functionally similar to the Metal ability in Kirby: Squeak Squad, although Metal Kirby can jump, float, and cannot detonate himself.

Kirby transforms into a giant brownish, black statue of himself. His mouth and eyes become hollow, like Kabu. 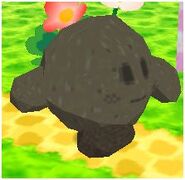