Current: Hat is similar to Ice's but has rocks instead of crystals, a horn on each side held by blue rings, and five decorative blocks on the front.

Stone is one of Kirby's Copy Abilities, debuting in Kirby's Adventure.

Stone is almost entirely a defensive ability—unless Kirby happens to use it above a foe's head. However, in Kirby's Return to Dream Land, Stone gets a move called Stone Uppercut, which gives another way to use the power for offense. Stone is an easy way to beat bosses with minimal damage by simply dropping over the boss's head and staying in stone form until the boss moves away. It can also avoid devastating full-screen attacks, like Marx's black hole, however, it cannot avoid some of these devastating attacks in the more recent games. The hat looks somewhat like a samurai helmet with a red plume on the top and a guard on the back, with a star on the forehead piece.

The Stone hat originally had the same design as the Ninja hat with different colors, but Kirby wears a different one as of Kirby's Return to Dream Land. It has a rocky appearance similar to Ice's. A similar brown hat was also intended for the unreleased Kirby GCN.

Stone is a Mode for Robobot Armor in Kirby: Planet Robobot.

In Super Smash Bros. for Nintendo 3DS and Wii U, Kirby can change his stone using custom moves. He can now also use Grounding Stone or Meteor Stone. Grounding Stone allows Kirby to bury opponents that he lands on, but it takes longer for him to transform. Meteor Stone gives a meteor effect to opponents hit by the attack, but it takes longer to transform out of.

Like in Kirby's own games, he's still invulnerable to attacks (except grapples and throws) regardless of what he turns into. The ability can be used to attack foes from above, which is the most frequently used form of this attack. The Stone also slides down slopes, so care needs to be taken when using the move near slopes. Also in Super Smash Bros. Brawl, the attack can be broken, as anything damaging enough to do at least 30% damage, despite inflicting no damage, can force him out of stone form with full knockback.

With the ability to instantly halt Kirby's movement on the ground or in the air, Stone is an extremely useful Copy Ability in Kirby's Dream Course. If the player activates it with good timing, it can be used to set up an ideal shot from any spot, rescue Kirby from rolling off the course or into a hazard, or even to drop straight down into a hole from above (which makes a unique "clunk" sound). However, it is typically not kept for long, since defeating an enemy with a different Copy Ability will always immediately replace it. Unlike with Needle, Kirby will not hang onto inclines in Stone form; rather, he will slowly slide down them without any sideways movement. A few holes are designed around this behavior.

In the anime, Kirby keeps the traditional Stone hat from Kirby Super Star, but his skin turns stone-gray instead of brown. Surprisingly, the ability works more like the one from Kirby 64: The Crystal Shards, specifically the Double Stone mix, allowing Kirby to turn into a giant, pink stone statue of himself which can walk and jump, albeit very slowly.

Stone Kirby relies on his sheer bulk to crush enemies. In the transformation sequence, Kirby's skin changes to gray. A flash of light forms his hat and he puts it on. 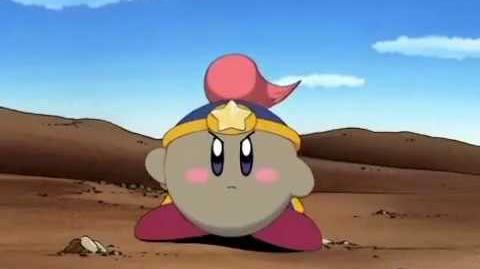 Stone Kirby Transformation
Add a photo to this gallery

The Stone ability's name is largely consistent throughout all other languages, with only the French name having a different meaning. Its Japanese name is ストーン (Sutōn), meaning Stone. Its German name, Stein, also means Stone, and so does its Spanish name, Piedra. However, instead of meaning Stone, the French name, Rocher, means Rock. The Italian name, Pietra, means Stone, and the Chinese name, 石块 (Shí kuài), also means Stone. 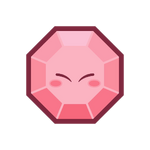 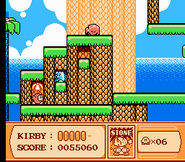 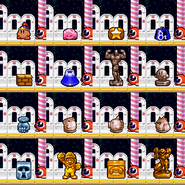 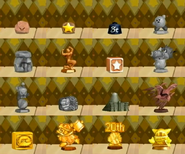 Kirby's Stone forms in Super Smash Bros. for Wii U 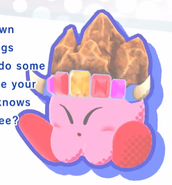 Retrieved from "https://kirby.fandom.com/wiki/Stone?oldid=306364"
Community content is available under CC-BY-SA unless otherwise noted.