Stickers are items in the Kirby series, debuting in Kirby: Planet Robobot.

There are a total of 200 stickers to collect throughout Kirby: Planet Robobot. Most appear as silver and blue paper circles with a peeled-up edge and a question mark on them. Rare stickers look the same but with a gold and rainbow color scheme.

Stickers are found within stages and are even given as prizes for landing on cloud 1 in the Goal Game. StreetPassing a player who also owns a copy of Kirby: Planet Robobot will cause Bandana Waddle Dee to appear mid-stage and toss Kirby one. Once the stage is completed, the stickers Kirby collected are revealed. The hero can pick up stickers he already has, so collecting them all is time-consuming. Additionally, the player can buy stickers for three Play Coins apiece; after purchasing five, he/she must finish a stage before more can be bought. Rare, gold stickers cannot be purchased with Play Coins, and must be found hidden inside stages. Alternatively, Bandana Waddle Dee may toss one if two players have StreetPassed each other a few times.

A sticker takes the form of a decorative decal that can be applied to Kirby's Robobot Armor. Collected stickers may be viewed and applied to the Robobot Armor in the Sticker Room. The Sticker Room may be accessed via the game's main menu or through a button on the bottom screen during the stage select menu in Story Mode. Most depict new artwork or cultural symbols, while others feature promotional artwork from past Kirby games.

Stickers are used in Super Kirby Clash as a form of communicating with other players online during and before battles. Various stickers have characters, phrases, and sound effects based on the depicted character to depict personality and get general messages across. They can also be used in Story Quests, but they serve no purpose when used as such. 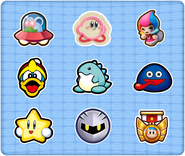 A sticker is applied to Robobot Armor.

Super Kirby Clash
Add a photo to this gallery
Retrieved from "https://kirby.fandom.com/wiki/Sticker?oldid=333852"
Community content is available under CC-BY-SA unless otherwise noted.