Kirby rides the Starship made from star power.

It is used for the sole purpose of taking down the giant comet, Nova, but also appears later in the remake during the battle against Kabula.

The Starship itself resembles the basic layout of a Roman chariot, but without the wheels. However, it distinguishes itself with a star on the front and two long streamers serving as walls.

The Starship's first appearance is in Kirby Super Star. It is used as the final and ultimate ability of the game, and as such, cannot be dropped (similar to the Love-Love Stick and the Star Rod). It appears after a cutscene between Kirby and Nova in the sub-game Milky Way Wishes. In it, Kirby is knocked out of the way by Marx, who wishes upon Nova for ultimate power. With Nova under his control, Marx leaves Kirby in a seemingly hopeless position, when the power of the Dream Fountains that Kirby had activated created the Starship. In it, Kirby then soared off to the interior of Nova to destroy it before it could reach Planet Popstar. In Kirby Super Star Ultra’s Revenge of the King, the Sparkling Stars banded together to form the Starship to help Kirby fight Kabula after she shot him down.

The Starship is similar to the UFO ability, but with different projectiles. The Starship rapidly fires star bullets, which do not need to be charged before use. However, there is a small delay between the bursts of shots, and fires two barriers diagonally from the star cannon. It also accelerates Kirby at extremely high speeds. However, it is very fragile, as it takes major damage if it touches any object inside Nova's first level. When fighting Galactic Nova Nucleus, the Starship does not take damage when it hits a wall, but Kirby may get crushed between the towers and the scrolling stage. The Starship is primarily used for the destruction of Galactic Nova Nucleus. The particular level the Starship is used in resembles a shoot-em-up game, such as R-Type or Gradius.

There is a Helper available for the Starship. It resembles what would be a metallic bug with large blue eyes. It is gold, has a horn on the top and bottom of its head, and rockets in the back of it. The Helper has the same properties as the Starship. It is only available in the two-player mode and cannot be used in single player. If Kirby has a Helper when fighting Galactic Nova Nucleus or Kabula, it is destroyed automatically before the fight.

Oddly, after using the Starship to escape the exploding Heart of Nova, the Starship completely disappears in the battle against Marx. This is rectified in Kirby Super Star Ultra, where it is shown that the stars used to create the Starship disappeared, leaving only the Warp Star. However, the Starship would return using the Sparkling Stars in Revenge of The King so Kirby can defeat Kabula, since there is no Mint Leaf in the game. Due to this, it possibly means it can be created with the power of stars.

Allows Kirby to travel forwards in the sky

In Kirby's Epic Yarn and Kirby's Extra Epic Yarn, this ability is used again, working just the same. It is known as the Star Shooter Transformation, and it is obtained very late in the game (in Dream Land). It is used in Cloud Palace to shoot Kracko out of the sky and on the final stage Battleship Halberd where Combo Cannon and the Reactor return. Its weaponry remains unchanged from Kirby Super Star, still firing a single star forward and two shorter-ranged ones at 45-degree angles.

In Space Land, there was a similar transformation: the Rocket. It shoots and flies upwards instead of horizontally, and instead of just shooting three streams of stars in a spread, it can project stars just forward at a rapid rate. 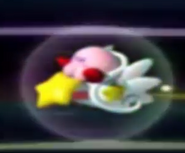