The Star Rod is a legendary item that Kirby wields to battle Nightmare. It is also considered a copy ability, though he doesn't need to inhale it to gain its power. The Star Rod is what powers the Fountain of Dreams and causes the magic waters to flow from it, giving good dreams to the people of Dream Land. When not there, people either have dreamless sleep, or nightmares, neither of which happens when it's in place. It has been stolen many times before, but has the ability to, even when cut into small pieces, be put back together and function as if it was never broken.

Kirby does not gain a hat with this ability, as with other final weapons. The Star Rod is a simple red and white swirled rod with a glowing star at the tip. It fires smaller stars to attack.

It is similar to Triple Star, but the Star Rod is slightly faster and has extra attacks.

So far, the Star Rod has made an appearance in Kirby's Adventure and its remake, Kirby: Nightmare In Dream Land. It is an item in the Super Smash Bros. series. There is a similar "rod" called Triple Star in Kirby: Squeak Squad.

The Star Rod is a wieldable weapon that anyone can use. Attacking with it does damage comparable to hitting someone normally with the Beam Sword, however, when used as a Smash Attack (or if a player holds a direction), it shoots out a star that sends enemies flying. If Sheik uses it as a Smash Attack it shoots two stars and using a Smash Attack whilst Captain Falcon wields it shoots four. The Star Rod only has enough power for 16 stars, then all the player can do with it is hit people with the rod itself. When attacking, hitting an opponent with the rod itself does more damage than the stars, which is the opposite of the Kirby's Adventure/Kirby: Nightmare in Dream Land incarnation of the item. The Star Rod is known for breaking many of the standard rules about reflecting items in Super Smash Bros. Melee. If it is thrown at Fox, Falco, Zelda, Mewtwo, Mario, or Dr. Mario's reflecting attacks, it will not be reflected. The star projectiles do reflect, but do no damage. In all three games, it has the interesting property of launching enemies horizontally when thrown, regardless what angle it hits at.

It has a Trophy, like every other item in Super Smash Bros. Melee.

It makes a return in Brawl, more or less the same as the previous incarnations, except it can now be reflected normally.

In the final episode of the series, Nightmare confronts Kirby in his dreams. There, Tiff summons his Warp Star, but instead of riding it, Kirby inhales it, granting him the Star Rod ability.

Kirby spins the Star Rod in an arc and unleashes a massive beam of stars which encircles Nightmare and destroys him. It remains unknown whether this incarnation of the Star Rod would have worked outside of a dream. 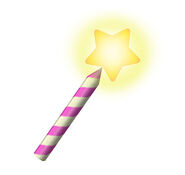 Kirby's Adventure
Add a photo to this gallery
Retrieved from "https://kirby.fandom.com/wiki/Star_Rod?oldid=164985"
Community content is available under CC-BY-SA unless otherwise noted.