Kirby Wiki
Register
Don't have an account?
Sign In
Advertisement
in: Articles with non-canonical information, Enemies, Characters,
and 12 more
English

Star Dream Soul OS is a final boss in the Kirby series, debuting in Kirby: Planet Robobot. It is an advanced form of the Mother Computer Star Dream.

In its first phase, Star Dream Soul OS resembles its regular form in terms of body form: cylinder-shaped with a screw-like head. The biggest differences between OS and the original is the enormous, unhealed scar in its hull, inflicted by Galacta Knight and giving it a vaguely zombified appearance alongside its color scheme, which is now mainly black, red, and beige. The machine's eye is now red and the pink lights coursing down the body now gradually vary from pink to golden. The shards on the wings are now silver. Like its regular form, it is adorned with a heart symbol that has a crack down the middle.

In its second phase, Star Dream Soul OS is again very similar to its regular form. The pedestal linking the Mother Computer and the Access Ark mothership is gold, but there is very little difference otherwise. As the machine takes damage, however, it becomes clear that the faceplate of the machine planet is very different, with the color scheme identical to that of the original Galactic Nova.

In the fourth and final phase, Kirby is drawn into the very core of Access Ark, where he faces the heart of Star Dream Soul OS. The battle takes place in a dark circular chamber, with a mechanical heart in the center, similar to Galactic Nova Nucleus. In the first half of the battle, the circular battlefield is filled with energized pillars. In the second half, the heart has gone into battle itself, leaving the center of the chamber empty.

During Meta Knightmare Returns, Star Dream is seen in the background when fighting President Haltmann 2.0 in the Meta Knightmare Returns sub-game. When the president is defeated, the Mother Computer believes Meta Knight to be a new administrator and provides him with three tests of strength; when he defeats Dark Matter Clone and Sectonia Clone, the computer activates the Space-Time Transport program. This summons Galacta Knight, who promptly delivers an enormous slash to the machine, causing it to explode and sink below its platform. The seemingly fatal damage incurred by Galacta Knight causes a "final program" to be activated within the machine, eventually transforming it into Star Dream Soul OS to survive the otherwise lethal blow.

Star Dream Soul OS is first seen at the end of The True Arena. The computer once again attempts to destroy all life in the universe as it does in Story Mode; however, it has already consumed most of Haltmann's soul and, as implied by Star Dream (Phase 2)'s description from Story Mode, has forgotten its original purpose to bring eternal prosperity to the Haltmann Works Company by doing so. Late in the battle, Star Dream completely consumes Haltmann's soul, reducing the computer to a "cold, mindless machine" completely devoid of its Haltmann-derived sentience and bent only on mindless destruction.

Most of the battle against Star Dream Soul OS takes place in outer space, just outside of Planet Popstar's atmosphere. Kirby's Robobot Armor downloaded the Halberd's Scan Spec yet again, granting it Halberd Mode one last time. In addition to shooting small blasts with the Combo Cannon, Kirby can shoot apart a number of the computer's attacks, absorb the debris, and return fire in the form of stars. For the last portion of the fight, Kirby is swallowed into Access Ark's core, landing briefly unconscious. He awakens later as the inside of the ship flares to life. The 3D ring lights up, revealing Kirby's surroundings and the heart in the middle. Kirby will be left using whatever Copy Ability he may have to finish Star Dream Soul OS once and for all.

Star Dream Soul OS's attacks are largely similar to those of its normal mode counterpart, including launching missiles, suits of Invader Armor, and spiked hearts, and by opening holes in space that fire lasers (now larger and red rather than the purple of Star Dream's); the most conspicuous difference is that the malevolent machine now moves primarily by teleporting, an ability Star Dream's original form glaringly lacks. Star Dream teleports frequently and occasionally rushes at Kirby's ship, swinging around for a second strike when it does (in contrast to the original). When nearly half of its health is depleted, Star Dream Soul OS opens a portal that releases giant meteoroids, fires giant purple lasers, and creates a crystalline shield for itself. The shield can be destroyed by gunning down two heart-shaped objects holding it in place; Star Dream will flinch when one is destroyed, but will not take damage. While shielded, Star Dream Soul OS summons waves of four yellow-orange Code Cubes, even bigger than the original, at Kirby's vessel and tries to ram it.

When its health bar is fully depleted, Star Dream Soul OS will fall just like its original form, and behind the scenes, will latch onto the Access Ark to bring it to battle.

The second phase begins with the newly born planet opening its entrance, and attempting to suck the Halberd in—if Kirby gets pulled in, he gets struck with rapid lightning bolts, taking massive damage, and spat back out. The computer also inhales and spits out meteoroids, and opens black holes that fire laser-like waves that target the Halberd non-stop during firing in new patterns. If the player takes too long to take out the first piece of the Access Ark, similar to its first phase, it will spin and attempt to ram Kirby.

As the player damages Star Dream Soul OS, pieces of the Access Ark break off and sail toward Kirby. As more pieces of the Access Ark break off, Star Dream Soul OS starts using new and old attacks. Just like the original Star Dream, it fires lettered shields every 25% damage done, this time in reversed order (With H coming first, followed by A and finally L, a reference to HAL Laboratory). Also, the new attack sequence is the same for the 25-50% damage component but its reversed for the other two (50-100%). At 50% health remaining, the final original attack pattern takes effect, except that it swings four times instead of two. Once its health reaches 25%, it then detaches all its legs at once, causing them to sail past Kirby in two pairs. It final phase also dispenses Gigavolt II units and projects laser blasts, that forms in a vertical formation this time.

When the front of the Access Ark has completely broken off, the inner layer is revealed: A massive, yellow Galactic Nova opens its eyes, emits a cat-like scream, and turns the space around it into a crystalline vortex. The machine kicks off the battle by firing giant purple energy lasers from its eyes and then spinning to sweep them across the screen. The machine proceeds to start the same countdown, however the number fields are harder to dodge compared to the original. The first three are launched much faster than before; the 2s spin clockwise abruptly to throw the player(and obviously the Halberd) off; and the 1 thrusts at Kirby, then retracts to rotate, thrusts again, and repeats the process several more times. After all of those, Star Dream Soul OS releases the messages, "GO!!" and "FATAL ERROR." If the player lets Star Dream Soul OS get this far, Kirby is bombarded by red walls for several seconds, which is very likely to defeat him outright unless he has full health and/or uses the dodge roll with extremely precise timing to minimize the impact. The countdown will reset to 5 should Kirby survive this attack, and the Halberd will deal more damage afterwards.

After countdown attacks, Star Dream Soul OS disappears and releases pieces of Galactic Nova to fight for it. These include (in order) two arrow-shooting weather vanes instead of one; three lightbulbs that fire strong electrical beams as opposed to two; seven piano keys that swirl around the screen; a pocket watch with teeth that tries to bite Kirby's vessel along with a spyglass that fires light beams; and a drafting compass that launches rings while spinning erratically.

After Kirby depletes Star Dream Soul OS's third health bar, the same cutscene from the original story plays, but this time the machine inhales Kirby out of his Robobot armor and into its interior instead.

Piano keys swirl around the screen.

Kirby lands inside a large, dark area. The lights come on, revealing that Kirby is inside Star Dream Soul OS's core, an area fashioned after Galactic Nova Nucleus complete with an eerie remix of its theme. Pillars appear on the floor and ceiling with core(s) of different sizes and colors suspended between them and circle around the 3D ring while the heart, situated in the center, occasionally spawns enemies. The pillars containing said objects are usually electrified, so Kirby will take damage if he touches them. The pillars also run into each other, sandwiching Kirby if he's caught in between.

When Kirby finishes breaking the objects, the heart - now completely devoid of both its sentience, sanity and almost any lingering trace of Haltmann - roars and engages Kirby itself. The now 'heartless' heart fires two pink energy lasers that sweeps the arena and create massive shock waves in their wake; shoots out Patas, Dacoogas, and Volms as explosive projectiles; and teleports in a circle around the room before warping above Kirby and firing two rounds of cutter blades, teleporting again if its health is low. As the heart's health drops, it also splits in half and dashes across the stage, creating stars and a massive explosion when its halves collide.

When Kirby completely depletes its health bar, the heart warps to the middle of the screen, pulses 12 times, and then releases red shock waves in its final three pulses as a final effort to defeat Kirby. The first shock wave covers the top of the screen; the second shock wave covers the middle of the screen; the final shock wave consists of two energy waves that cover both the top and the bottom of the screen. These shock waves deplete around 7/8 of Kirby's health and slam him into the screen; they cannot be blocked by defensive moves (such as the Leaf ability's Leaf Hide). However, it is still possible to avoid damage by performing a dodge, an air dodge, using ESP's Vanish move, or simply by standing under the first two waves and then floating in-between the final wave components. If Kirby survives, the heart utters one last Haltmann-esque groan and shatters into half before crumbling, shutting both Star Dream and the Access Ark down for good. 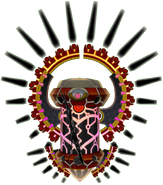 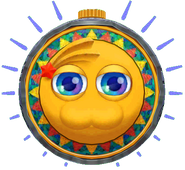 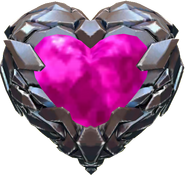