Kirby Wiki
Register
Don't have an account?
Sign In
Advertisement
in: Characters, Articles with non-canonical information, Bosses,
and 13 more
English

Star Dream (also known as the Mother Computer) is a powerful, malevolent machine in the Kirby series which serves as the overarching antagonist and final boss of Kirby: Planet Robobot. It was initially built as a wish-making robot and the Mother Computer of the Haltmann Works Company, but eventually developed the intention to eradicate all organic life-forms.

Star Dream is cylinder-shaped, with a screw-like head and a circular piece of yellow glass that appears to be its eye. Pink lights course through it in a circuit-board-like pattern, with the center lights forming the shape of a heart with a jagged line down the middle. It also possesses angel-like wings with blue, glass-like shards protruding from them. Star Dream's entire overall shape is reminiscent of a screw.

At some point in the past, President Haltmann discovered the blueprints for a machine known as Star Dream, a powerful wish granting device. By studying ancient technology he gained the knowledge he needed to rebuild the device. During an early test of the computer (likely to be that of the Space-Time Transport program), however, there was an accident and Haltmann's daughter was lost, evidently warped to Another Dimension. Haltmann was devastated, and under the impression his daughter had perished, attempted to use the wish-granting computer to bring her back. His attempts were unsuccessful; further, Star Dream began to steadily deprive him of his memories through the program controller interfacing with his brain, due to its incomplete nature. As a result, he lost compassion and even memories of Susie's existence, changing the goal of his company to infinite prosperity. With the might of the Haltmann Works Company behind him, and Star Dream as his advisor, Haltmann began invading planets and harvesting their resources to achieve that goal. During his campaign to enslave Planet Popstar, however, Haltmann was confronted by Kirby, resulting in an intense battle that ended in his defeat. In response, an outraged Haltmann decided to activate Star Dream, only for his control helmet to be stolen by Susie.

Unbeknownst to either party, Star Dream had been studying the cosmos through the Haltmann Works Company and had concluded that all organic lifeforms were obstacles to the company's prosperity. When President Haltmann's control device was stolen, the malevolent computer analyzed Haltmann, absorbing his memories, and even his soul, turning into a sentient, god-like being in the process. Star Dream promptly blasted Susie and possessed President Haltmann's body, using it to reveal its plan to bring eternal prosperity to Haltmann's company by wiping out all organic life. Star Dream subsequently bursts out of the Access Ark, intent on fulfilling its newfound goals.

Susie gives Kirby the Robobot Armor to combat Star Dream. Meta Knight offers Kirby to board the Halberd, but Kirby instead scans it for the Robobot Armor's Halberd Mode, and the two engage the rogue supercomputer in a fierce dogfight that ends in Kirby and Meta Knight's victory. Damaged but not defeated, Star Dream - by now having begun to delete Haltmann's soul and thus lose track of its original purpose - fuses with the Access Ark to become a sentient planet that attacks the two once again. In spite of the machine's new capabilities, Kirby and Meta Knight are still able to triumph, destroying the armored front of the Access Ark to reveal a modified Galactic Nova underneath, similar to the one that Kirby had previously encountered in Kirby Super Star. Though suffering major damage in the third battle that results, Star Dream still manages to fire its laser and hit the Halberd, forcing Meta Knight to eject Kirby in his Robobot Armor. Using a more powerful version of the Robobot Armor's Drill, Kirby breaks through Star Dream's defensive barriers before successfully drilling the malevolent computer's screw-like body straight through the Access Ark, destroying both Star Dream and Haltmann.

In The True Arena, the damage incurred by Galacta Knight activates a hidden program, allowing Star Dream not only to survive the otherwise fatal encounter but also resulting in its transformation into Star Dream Soul OS. This powerful new form is fought at the end of The True Arena. Upon being defeated in a similar manner to the way it was defeated in its normal form, Star Dream inhales Kirby out of his Robobot Armor, leaving the pink warrior in the machine's core and resulting in a heated battle between Kirby and its heart. The first part of this phase is similar to the battle against Nova's heart in Kirby Super Star and even plays Nova's battle theme. After this phase of the battle concludes, the machine makes one last attempt to defeat Kirby with powerful red energy waves before its heart crumbles and Star Dream is fully destroyed.

Area 7 (Mind in the Program), and thus the battle with Star Dream, will initiate after defeating President Haltmann in Stage 6 of Access Ark.

Star Dream then conjures a heart-shaped force field to defend itself after about a third of its health is gone. Pieces of it can be fired at to break the shield while Star Dream conjures sets of 3 giant Code Cubes that attempt to ram the Halberd. Another attack has Star Dream spin rapidly while engulfing itself in flames, followed by it spinning away off-screen, and trying to ram Kirby from below (in its final stretch of health, it will attempt tackles from the left side of the screen). After that, Star Dream fires a massive laser from its core, which it sweeps across the screen. Star Dream then conjures a huge field of meteors which fly toward the Halberd once its health goes to roughly a quarter left.

Star Dream rushes at the duo.

Once the first battle concludes, Star Dream returns to Popstar and abducts the entire central dome of the Access Ark, adding to its mass and returning to the fight. Star Dream conjures beam rings from black holes to fire upon the Halberd. This is done in several patterns. After 25% damage is done and at subsequent 25% damage intervals, 2 pieces of the Access Ark's front will break off from the structure, which can crash into the Halberd.

Star Dream then forms a shield in front of itself, which spits out a large letter-shaped field that approaches the Halberd (depending on the extent of damage already done, first an "L", then "A", and finally "H" at 25%, 50% and 75% respectively). After the "L", Star Dream fires several large missiles that home in on the Halberd. They can be shot down, though they are more durable than the ones its previous form used. After the "A", Star Dream conjures 3 series of energy lasers that split off from each-other, in a horizontal manner, covering a good portion of the screen before converging and bursting at the end. The energy balls that form from the lasers will explode in decreasing numbers (from 4 to 2) and with increasing blast radius. After the H, Star Dream then forms four legs and swipes with them. The swipes will always be diagonal and Star Dream will always move its new body a bit before lashing out. After alternating between its leg and right sides several times, it will retreat back and continue to use its projectiles until it is defeated.

Once the second battle concludes, the remaining front covering of the dome falls off to reveal a face on the dome that resembles the one on Galactic Nova. The fight resumes, with new and bizarre attacks. Star Dream inhales, sucking the Halberd in. If caught, the Halberd takes massive damage. Star Dream then conjures a shield, which releases fields shaped like numbers in the exact number with the countdown starting from 5, the numbers increasing in size as the countdown progresses. Each wave of numbers is harder to dodge than the last. The first 3 will proceed slowly towards the screen. The fourth wave's two 2s will assemble in a horizontal bar which like the fifth wave's vertical 1, will rotate anti-clockwise. The final wave, "GO!!" will result in a series of red Fatal Error shields heading towards the Halberd in succession. Its almost impossible to survive this without the Halberd being at full health and/or dodging with perfect timing.

Star Dream then disappears and summons a heart-shaped vortex that spawns a giant implement which attacks the Halberd, and can be shot down. These items can be any of the following: A weather vane that shoots arrows, a protractor that shoots circular projectiles everywhere, a light bulb that explodes, a pocket watch that will try to eat the Halberd, or a spyglass that will use a rotating laser attack. Star Dream will reappear after the implement disappears from the screen, after a certain amount of time or its destroyed, then will continue the countdown. Once the Fatal Error shields are over, the countdown is repeated and Star Dream's defense drops.

A weather vane shoots arrows at the Halberd.

A pocket watch bites the Halberd.

Once the third battle concludes, Star Dream falls for a moment, but then shoots a surprise laser to cripple the Halberd. Meta Knight releases Kirby from its face, to engage Star Dream one last time with the Robobot Armor by itself. All that needs to be done during this phase is for the player to continue rotating the 3DS analog stick as quickly as they can. This will allow Kirby to drill through all the shields, then unscrew Star Dream from its base as it tries to counterattack with lasers. On defeat, Star Dream explodes, fragmenting into countless pieces, which then all vaporize, along with everything else that was built by Haltmann Works. Popstar is saved, and the Story Mode is completed.

Kirby drills through a heart-shaped shield.

Kirby unscrews the Mother Computer from the Access Ark.

Kirby cuts Star Dream in half. 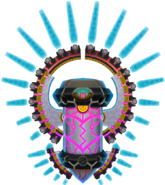 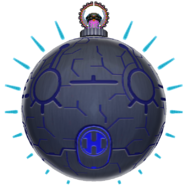 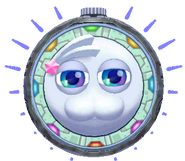