Breakable block that can be inhaled and spat out.

A Star Block is a yellow block with an upright five-pointed star on its sides. Oftentimes, the stars are colored white and the blocks also feature white borders.

Star Blocks are the most common destructible block type. They can be destroyed by most damaging moves, and can also be inhaled to use as ammo or to be swallowed. While they commonly serve as obstacles, they may sometimes serve as terrain, such as platforms.

Some Star Blocks now hide Point Stars behind them, adding further incentive to break them aside from them simply being in the way.

Some star-shaped projectiles fall down and create Star Blocks upon landing. This phenomenon is present in The Great Cave Offensive's Garden Area, in the room where the Spirit Charm Treasure is located.

These falling stars also appear in Revenge of the King's The Revenge.

In Kirby's Dream Land 3, in Stage 6 of Ripple Field and Cloudy Park, Kirby needs to destroy certain Star Blocks to immitate the shape of HB-002 and HB-007 respectively in order to obtain their Heart Stars.

In Kirby 64: The Crystal Shards, in Stage 3 of Neo Star, Adeleine can make a painting of a top hat, an umbrella, or a pizza; in the following room, Kirby needs to destroy certain Star Blocks to immitate the shape of the painting in order to summon the Crystal Shard in the middle.

The enemy Blockin disguises itself and behaves like a Star Block when not disturbed. If inhaled or attacked, Blockin will reveal its true form and pursue Kirby.

Star Blocks can only be destroyed by touching them with the stylus, Copy Abilities, or Dedede and Waddle Doo Balls' hammer and beam attacks respectively. Star Blocks come in small and large varieties.

Star Blocks come in small and large varieties. The large ones can still be destroyed normally, but require a Super Inhale in order to be inhaled. Blockin also returns as an enemy that disguises itself as a Star Block.

Star Blocks come in small and large varieties. The Kirbys must either jump into Star Blocks to damage and destroy them, or pummel enemies and slam them down on top of the blocks to destroy them. Fruit and Medals may also be found behind Star Blocks.

The enemy Blucko resembles a Star Block, and is defeated in the same way; it attacks by jumping and trying to crush any Kirbys below. The Block Waddle Dee mid-boss wears a carved out Star Block as armor, and also drops Star Blocks and Bluckos to crush the Kirbys.

Super Inhale can be used to inhale multiple Star Blocks at a time.

The large variety returns in Kirby: Triple Deluxe, but only in Royal Road's first HAL Room; it takes three hits to destroy (similarly to Terrain Blocks) or it can be Super Inhaled. It produces a piercing Star Spit when exhaled, in contrast to Kirby: Squeak Squad, where it produces a normal Star Spit, as with all large enemies.

Large Star Blocks return in Kirby: Planet Robobot, occasionally appearing in stages, but most prominently appearing in Access Ark's first HAL Room. Unlike in Kirby: Triple Deluxe, they only require one hit to destroy, but still produce piercing Star Spit after being Super Inhaled.

Large Star Blocks appear in Kirby Star Allies, appearing in the Jambandra Base HAL Room. Their properties are identical to in Kirby: Planet Robobot.

Unlike in Kirby: Canvas Curse, Star Blocks cannot be tapped to damage or destroy them; instead, they are damaged by Kirby Tap Dashing into them, requiring two hits to break.

Star Blocks typically serve as ammo for Kirby to use against enemies. 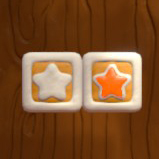