Press ↑ when standing on a Friend Platform with three Friends

A star, with one friend in the front piloting and the others on the star's tail

Moves around in a 3D space, can double jump

Can fire homing shots imbued with the pilot's Copy Ability

The Star Allies Sparkler is a Friend Ability and Final Weapon in Kirby Star Allies. It is used by Kirby and his three friends in the battle against the first and third phases of Void Termina.

The weapon's body is shaped like a star cut vertically in half, with the driver filling the gap. The vehicle's rear is decorated with brightly-colored objects that look like feathers, and the outmost corner of each star half is branded with a white, star-like insignia. If the driver is Kirby, he wears a pink, heart-shaped visor over his face, while the remaining friends sit on the star's trail.

The Star Allies Sparkler also has a few options in terms of attacking. Its basic attack shoots out a single star-shaped projectile, which can either be manually aimed or locked onto a target to home into it. If this move is charged up, a stronger, double star projectile will be shot that has the same aiming options. These projectiles are affected by Copy Abilities in the same way as the Star Shots from the Friend Star. In multiplayer, if everyone holds the attack button and releases it simultaneously, the Star Allies Sparkler will fire a devastating laser. 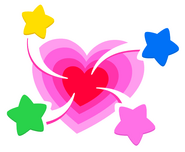 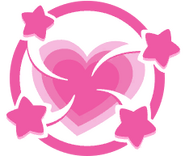 Kirby and his friends work together to release a giant laser.

The Star Allies Sparkler jumps to dodge a shockwave.

Plugg shoots a Sparkler Starshot imbued with the Plasma ability.

Kirby and his friends preparing to land the final blow on Void Termina. (Ver 4.0.0)
Add a photo to this gallery
Retrieved from "https://kirby.fandom.com/wiki/Star_Allies_Sparkler?oldid=332468"
Community content is available under CC-BY-SA unless otherwise noted.