Stars are an important recurring motif throughout the Kirby series, especially the yellow five-pointed star. They represent Kirby himself, as the Japanese name for the Kirby series and Kirby: Right Back at Ya! is Hoshi no Kābī, literally translating to "Kirby of the Stars." It is also the title for Kirby himself in-universe in the Japanese versions of the games. Against Nova in Kirby Super Star and its remake, Kirby's Starship is formed from stars themselves. Yellow stars also often appear as a result of heavy impacts during Boss and mid-boss battles, where they can be used as ammunition by Kirby. In Kirby Star Allies, some of the attacks of The Three Mage-Sisters and Hyness creates elemental variations of stars, which Kirby can copy it to get Fire (red stars), Ice (blue stars), Plasma (green stars) or Beam (orange stars), among others.

Stars are a common decoration on most things related to Kirby and objects common in the series, for example, Kirby's Warp Star, Planet Popstar, King Dedede's Hammer, and Star Blocks, and they have a prominent role in gameplay.

Point Stars are collectibles introduced in Kirby's Dream Land 2. Whenever Kirby has collected enough, he gets a 1UP. It takes a varying number of stars before Kirby is granted the 1UP. Getting large numbers of them is possible in most Goal Games.

Upon performing the inhale, Kirby has the choice of either swallowing the object in his mouth or spitting it back out i.e. the Star Spit attack. Should he decide to spit it out, the object, regardless of what it was, becomes a star projectile. If Kirby inhales more than one object at once, the resulting star is much more powerful, and can go through enemies and hit larger ones more than once.

In Kirby: Squeak Squad, such stars can be manually made using Bubble on ability-neutral enemies and saved within the Copy Palette to be used by Kirby when needed. If used normally, they behave as regular star projectiles, but can become one of two variants if combined with one-to-two other star bubbles, resulting in a larger and more powerful projectile.

Star projectiles in Kirby 64: The Crystal Shards have a different appearance to the five-pointed yellow variety in every other game. Instead of spitting objects out as stars, Kirby spits out the object as it is. When lifted above Kirby's head, however, if it is an ability-yielding enemy that has been swallowed or any multiple enemies that have been inhaled, they turn into stars; the ones which yield Copy Abilities turn into four-pointed stars with the color of the ability and a ring surrounding it, while ability-neutral ones give white, five-pointed stars. If two enemies are inhaled simultaneously and one is ability-neutral and one is not, the resultant star has a light texture of the color representing the copy ability. If two ability-yielding enemies are swallowed at the same time, the star will have the color of the Copy Ability, eight points, and two rings around it. Also, throwing a star into an ability-yielding enemy will cause the enemy to turn into an eight-pointed star, and the two abilities will mix.

Should Kirby be using a Copy Ability and take (enough) damage, or should he manually abandon the ability, the ability will be lost in the form of the Ability Star. This star is very fragile and does not survive very long outside of Kirby, and bounces about the stage, but can be re-inhaled if Kirby gets to it in time. Should it be lost in water, it will float slowly upwards towards the surface. It disappears as soon as it touches Spikes or Lava. In Kirby 64: The Crystal Shards, Kirby can hold an Ability Star above his head, and can either throw it at another enemy to mix abilities, swallow it, or just dispose of it. In Kirby's Return to Dream Land and several games that followed, Ability Stars have their own unique coloration, and a symbol on the front. There are even Ability Stars for Super Abilities.

Colored Ability Stars are a type of star that appears in Kirby Star Allies. It provides a different ability depending on its color. They can be found in fights against Francisca, Flamberge, Zan Partizanne, Hyness, Void Termina (phase 4), and Void Soul.

Blue Stars are items in Kirby Tilt 'n' Tumble and Kirby's Blowout Blast.
In Kirby Tilt 'n' Tumble, look like the Sparkling Stars from Kirby's Dream Land, but are blue. One Blue Star is hidden in each level of the game. If Kirby gets a Blue Star and beats the level he found it in without losing a life, he will leave the level on a Bonus Star, which is a blue version of the Warp Star. From there, the player must choose a sub-game to play.

Kirby exits a stage on a Bonus Star.

Red Stars are also items exclusive to Kirby Tilt 'n' Tumble. They look exactly like Blue Stars, but are red in color. One Red Star is hidden in each level of the game. Like with Blue Stars, the player does not get any benefit from them unless he/she beats the level without losing a life. To complete the game 100%, the player must collect all of these.

The Star Seals are items in Kirby: Squeak Squad which unlocks the sealed door at the end of Ice Island leading to Secret Sea and to Meta Knight. Each are found in a different Treasure Chest in each previous world, and the ones containing a Star Seal glow brightly with an aura.

The five Sparkling Stars are key collectible items in Kirby's Dream Land, Kirby's Block Ball, and in Spring Breeze of Kirby Super Star and its remake. They are recovered from King Dedede's minions in each level and allow Kirby to return all of the stolen food back to everyone on Popstar.

The heroic heart is Kirby's heart that appears after he has been split into ten in Kirby Mass Attack. It acts similarly to the Magical Paintbrush of Kirby: Canvas Curse. It looks like a star. 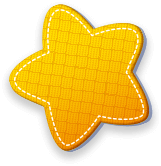