A red cap with a salmon pattern, with its golden band curving upward near the forehead up to a dark blue gem with a gold rim

Staff is one of Kirby's Copy Abilities, first appearing in Kirby Star Allies.

The Staff ability allows Kirby to wield an extendable staff. This can be used for jabbing, swinging, and using like a pogo stick. Some attacks that use the staff have long range, or reach into the air. The Staff ability can be permanently imbued with an element. 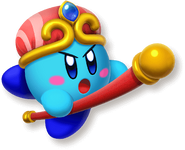 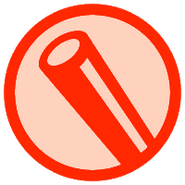