Stactus is an enemy in the Kirby series, debuting in Kirby Mass Attack.

Stactus is a small green cactus-like creature. It has four droopy needles, a pink flower on top of its head, two eyes with black crescent-shaped pupils, and small stubby arms. Its standard expression is a cheery smile.

Stactus primarily appears in Sandy Canyon, being the most common enemy seen on that island. Stacti are presumed to be ruled over by the queen of the desert, Lady Ivy.

Stactus generally sits in one spot, though some slowly inch forward. As its name suggests, it has a tendency to stack atop other members of its species, becoming a tower of enemies. Stactus' attacks by charging up and extending its spikes. Any Kirby that comes in contact with these thorns takes damage. When the enemy is vulnerable, it takes only a few Kirbys to defeat.

There are three main types of Stacti: 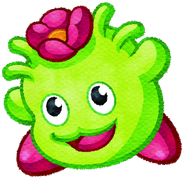