None, Spark (anime only)

Squishies are squid-like enemies that have been around since the first Kirby game. They provide no ability when inhaled and swallowed.

Although Squishy is a regular enemy in most cases, Squishy is actually a staple in most spin-offs, such as Kirby's Avalanche. Squishy featured as the boss of the second level in Kirby's Block Ball. Here, it was able to extend its tentacles, a technique which it would later use as a monster in the anime. In the Extra Game of Kirby's Dream Land, Squishy is replaced by Flotzo.

Squishy is a small white (or a light brownish-yellow in some games) squid with small beady eyes and eight tentacles. The two tentacles on either of its sides are noticeably longer than the six at the bottom, and are usually held upright at both sides of its head.

In the anime, Squishy's true form greatly resembles its appearance in the games, but is much larger. Its tentacles are thicker and more muscular in this appearance, and it is able to stretch them to grapple and hit its foes. As opposed to the small black eyes it has in the games, Squishy has glaring yellow eyes in this form. Prior to the fight, Squishy appears as a miniature version of its game design.

Squishy appears in the episode Dedede's Raw Deal. In this episode, King Dedede starts up a small sushi restaurant in Cappy Town, but this really ends up being a plot to defeat Kirby. The sushi restaurant expands from Cappy Town all the way through Kirby's house. Kirby ends up eating a small Sweet Potato, which prevents him from inhaling and gives him a case of the hiccups. Kirby hiccups on a plate containing a small version of Squishy. Enraged, the small Squishy grows into its true form; a hulking krakken-like monster with stretchy tentacles. Strangely, in the anime Squishy has electrical based attacks, similar to Master Green from the games. After Squishy hits him around and zaps him with some sparks, Kirby is scared out of his hiccups after Tiff yells at Kirby saying "Kirby, with those hiccups you'll never be able to eat again". Kirby then is able to inhale some of Squishy's sparks, making him Spark Kirby. After hurting Squishy with some spark attacks of his own, Kirby blasts Squishy into the air and unleashes one last huge spark attack. The mass of electricity collides with Squishy, destroying it and leaving Kirby with tons of sushi that rains down from the sky.

The giant form of Squishy, due primarily to its sheer size, faintly resembles the first Demon Beast Kirby faced in the series, Octacon. Squishy's mastery of electricity indicates that the Kirby's Dream Land 2 mini-boss, Master Green, may have been the inspiration behind this incarnation of Squishy. 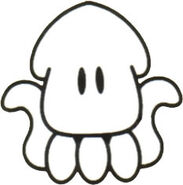 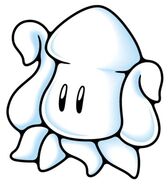 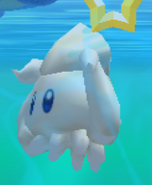 Kirby Mass Attack
Add a photo to this gallery
Retrieved from "https://kirby.fandom.com/wiki/Squishy?oldid=124829"
Community content is available under CC-BY-SA unless otherwise noted.