The Squeaks, also called the Squeak Squad, are a gang of mouse-like thieves that appear as the secondary antagonists in the game Kirby: Squeak Squad.

At the beginning of Kirby: Squeak Squad, Kirby is getting ready to have a snack, then a member of Squeaks steals Kirby's Strawberry Shortcake. According to Japanese sources, the Squeaks turn out to be after a treasure that Daroach believes contains an ultimate power. Kirby chases them through different worlds, all the way to their home in Ice Island, where their main hideout is located. Just as Kirby is about to finally reclaim the chest which he thinks contains his strawberry shortcake, Meta Knight steals the treasure and sails through a star door only openable via the five Star Seals. Provided he has collected all five Star Seals, Kirby opens the door, goes through the Secret Sea, and defeats Meta Knight, only for Daroach to take the chest again. But the chest turns out to have neither Kirby's shortcake nor any ultimate power, but instead a dark, eerie cloud of smoke that envelops Daroach and the rest of the Squeaks and disappears into space. After Kirby frees all of the Squeaks from Dark Nebula's possession and defeats Dark Nebula, the Squeaks decide to look elsewhere for treasure, and leave for parts unknown.

In the game's after-credits ending, the Squeaks give Kirby his shortcake back, presumably to apologize for all the trouble they caused.

In Kirby Mass Attack, members of the Squeaks return to help Kirby return to normal. The leader, Daroach, pilots an airship and gives the Kirbys hints of where certain medals are. After the Kirbys collect all of the medals, Daroach takes them off of the Kirbys' hands, and in exchange, gives them the final unlockable sub-game, Survival Rush. Daroach then leaves along with the rest of the Squeaks.

It is unknown why Daroach re-introduces himself as Kirby defeated him in Kirby: Squeak Squad, an encounter which Daroach should have remembered, although it was most likely done for players who were unfamiliar with the events of Kirby: Squeak Squad.

The Squeaks can be summoned by Daroach as one of his moves. Spinni slashes with the Animal claw, Doc orbits Daroach in a manner somewhat similar to UFO's Star Guard, and Storo performs three consecutive ground pounds.

Squeaks will appear in various circumstances to steal any treasure chest they can find, grab, and take to a hideout. To make sure he gets the chest, Kirby must fight them until they get knocked out, and then take it. If a Squeak takes it to a hideout, Kirby must hurry before they bar up the entrance door. If Kirby loses a life in an attempt to get a chest, he has to replay the stage to get it. 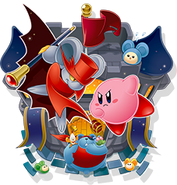