The Squeakers make up the bulk of the Squeaks, and appear in Kirby: Squeak Squad and as a cameo in Kirby Mass Attack, as well as in Kirby Star Allies. They make up the lowest rank in Daroach's gang, but there is a very large number of them. Ghost Kirby's ability to control his enemies won't work on them.

There are four colors of Squeakers: blue, green, yellow, and red. The color of the Squeaker determines its special abilities. Squeakers only appear under special circumstances - In a room with a big chest, the Squeakers will replace all of the original enemies in the room to impede Kirby's progress, so one of the high-ranking Squeaks can catch up to Kirby.

Red Squeakers were not present in the retail version except in the cutscene at King Dedede's castle and the Smash Ride sub-game.

In Kirby Mass Attack, Squeakers appear on the bottom of the Touch Screen when the Kirbys are talking to Daroach in his airship. Daroach also mentions that the Squeakers are field agents who search for medals across the Popopo Islands.

In Kirby Star Allies, Daroach can summon Squeakers that will hop around. They can only be summoned when Spinni has already been summoned.

Squeakers are small mouse-like creatures that are simple in appearance. Their bodies are shaped similar to that of a tadpole's and they will either be seen colored blue, yellow, or green. Their faces are a peach color and they have two shiny eyes and a mouth. They have two large ears on the top of their heads. Squeakers lack limbs, and have small tails.

Squeakers comes from the onomatopoeia for the sound a mouse makes, squeak. 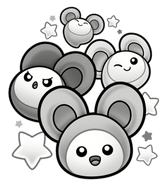 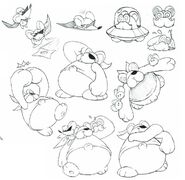 The concept art of Squeakers 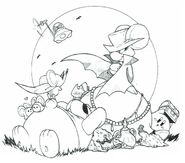 The concept arts of Squeakers