A purple bowler hat with a web-like pattern on the crown portion, six golden oval plates on its front and six dark blue appendages with an indigo stripe, three on each side.

Spins threads to capture and defeat its foes. Its webs can also be used to assist allies.

Spider is one of Kirby's Copy Abilities, first appearing in Kirby Star Allies.

The Spider ability allows Kirby to utilize spider webs to trap enemies. The webs themselves linger for a few seconds after being released, and any non-invincible enemy that comes into contact with a web will be encased in a web themselves. Once trapped, enemies can either be kicked into other enemies or be grabbed and thrown. Kirby and his friends can bounce off the webs created by Spider's attacks to gain extra height in a Friend Ability called Friend Bounce. 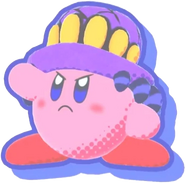 Retrieved from "https://kirby.fandom.com/wiki/Spider?oldid=333636"
Community content is available under CC-BY-SA unless otherwise noted.