A Sparkling Star is a plot-important item in the Kirby series, debuting in Kirby's Dream Land. These magical objects are used by the people of Dream Land to work and play among the heavens. Four or five exist, depending on the game.

A Sparkling Star is a Kirby-sized star with a smaller star revolving around it.

According to the instruction manual, the Dream Landers use the Sparkling Stars to "play and work, among the heavens" and without them, they become "unable to gather food."[1] King Dedede steals all five of them and gives them to his strongest henchmen to guard, keeping one for himself. Every stage in the game has one Sparkling Star that is obtained after defeating a boss.

After Kirby collects the last Sparkling Star, they all gather in his body--causing Kirby to blow up to a huge balloon-like size and carry King Dedede's Castle (full of Dream Land's stolen food) back to the Dream Landers. After a bit, he returns to normal; the Sparkling Stars leave his body, but start floating beneath the castle, suspending it in the air while the food pours out of it.

King Dedede steals the five Sparkling Stars and hides them inside his castle in Blockworld. At the end of the game, Kirby defeats the villain. The Sparkling Stars destroy Dedede's stronghold and reveal that a fountain is built on its foundation. Kirby dances in the fountain's gushes as the credits roll.

As Spring Breeze, is a retelling of Kirby's Dream Land, the same basic premise occurs again, as it is based on the original formula as a tutorial sub-game. This time, King Dedede steals only four of them as one of the levels Castle Lololo has been removed. In the remake-exclusive Revenge of the King, Dedede steals three of the stars once again to lure Kirby into a revenge plot. When the new and improved Kabula destroys Kirby's Warp Star, the three Sparkling Stars he has collected merge into the Starship, allowing Kirby to return and defeat Kabula. 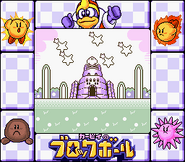 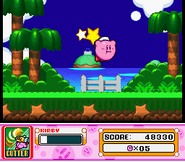 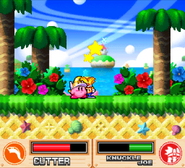