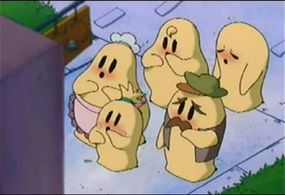 Something to Sneeze At

The Bitter Cold of December

Something to Sneeze At is the 63rd episode of Kirby: Right Back at Ya!.

King Dedede is wondering why everyone is getting sick and not him, so he finds way to make himself sick.

The episode starts with Customer Service begging Dedede to buy a Demon Beast from him to prevent his company from going bankrupt, but Dedede refuses. He and Escargoon go to Kawasaki's to eat, but as he brings their food, he sneezes, covering Dedede with pizza, and giving a cold to Escargoon. Dedede quickly gets away, and finds that everyone in the village is sick. Only the Waddle Dees and Kirby don't have colds. Escargoon says something about what people are called when they don't get colds, but he doesn't say it completely. Dedede then decides to spy on Tiff and Tuff to see if they have colds, which they do. Tiff says that she's jealous of Kirby, since he doesn't have a cold. At that point, Tuff says that idiots don't get colds, which infuriates Dedede. He then uses the opportunity of Kirby not getting a cold to tease him, But Tiff spied on him, so she and Tuff set up a plan to prevent Dedede from teasing Kirby, by making him pretend to be sick.

The plan worked, and Dedede wants to get a cold. Customer Service says that if he gets cold, he may catch one. Dedede tries to freeze himself and get sick, but each attempt fails. Customer Service then sells him a Cold Virus Demon Beast to help Dedede get sick. He swallows the Cold Viruses, then after a success in catching a cold, he runs amok in town, harassing the Cappies saying that he's caught a cold. But after a while, he starts suffering from his cold, so he calls Customer Service, to find that he got cured of his cold by passing it to someone else. Dedede then tries to pass it on to the Waddle Dees, but he fails. He then tries to pass it on to Kirby by shrinking him, then swallowing him. The Cold Viruses have multiplied, so Dedede is suffering great pain. Kirby inhales all the viruses, but Dedede sneezes, reverting Kirby back to normal, spitting out all of the viruses, and expelling him out of his body. The next day, everyone in Cappy Town is cured of their colds, except Dedede, who is suffering greatly. As Escargoon and the Waddle Dees do their best to nurse King Dedede (whose sick in bed in the throne room) back to health, Customer Service happily tells Dedede and Escargoon that the purchose of the Microtizer and the Virus made him Nightmare Enterprise's Employee of the Year. After Customer Service says goodbye, King Dedede asks Escargoon to see if he's any better, only to sneeze in Escargoon's face. Escargoon fans away, telling King Dedede not to spread it. Tiff and Tuff laugh nearby as Kirby happily eats a steaming hot Chinese meat bun.

Retrieved from "https://kirby.fandom.com/wiki/Something_to_Sneeze_At?oldid=171695"
Community content is available under CC-BY-SA unless otherwise noted.