Soldier Waddle Dee is an enemy in the Kirby series, debuting in Kirby Battle Royale. He is a Waddle Dee who holds a position in King Dedede's royal military.

Soldier Waddle Dee looks like an average Waddle Dee. He wears a purple peaked cap with a brass spike on its top, a chin strap, and King Dedede's insignia on its front. He wields a spear.

Some Soldier Waddle Dees have blue or green fur.

Soldier Waddle Dee appears exclusively in the game's Story Mode, The Cake Royale. Kirby and Bandana Waddle Dee first meet one after disembarking the Warp Star in the introduction. In order to enter Dedede's stadium and compete in the tournament, the hero must first prove himself by beating the Waddle Dee in a one-on-one Apple Scramble match. Kirby does so and is allowed inside.

Soldier Waddle Dees most often act as guards in Dedede's stadium or throne room. They use their authority to prevent trouble rather than their spears. Two serve as gatekeepers, preventing unqualified competitors from entering Qualifier Battles. One gives Dedede updates on Kirby's (and Meta Knight's) progress in the competition.

Soldier Waddle Dees act as the opponents in some Qualifier Battles, mainly the one in the Beginner's League. A blue soldier serves as Dedede's partner in the Platinum League qualifier, and both a blue and a green soldier accompany the king in his penultimate battle. These opponents have the same moveset as the Spear ability. 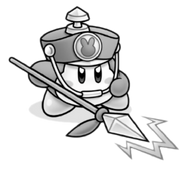