Kirby Wiki
Register
Don't have an account?
Sign In
Advertisement
in: Enemies, Characters, Enemies in Kirby & The Amazing Mirror,
and 12 more
English

Soarar is an enemy in the Kirby series, debuting in Kirby & The Amazing Mirror.

This is Soarar's first appearance. They fly back and forth in a particular area. They do not aim for Kirby, however, and are more of a nuisance than an enemy. They shoot pink blasts aimlessly straight forward and then turn with a sharp screeching sound. The blasts travel for an infinite distance.

In this game, Soarar is technically unchanged, but this time around, their ability to fire lasers is rarely used. They can be summoned by Drawcia in the battle against her.

Soarar appears in many stages, primarily in Green Grounds. In this game, Soarar does not attack the Kirbys, and instead will be merely flying overhead carrying an item. The enemy can be defeated by only a single Kirby if grabbed while flying; flicking one Kirby with the stylus is ideal for this.

Soarar also appears in the fruit fetching games, where it carries cards with pictures of either a useful object or a Mono Soarar. Depending on the circumstance, the player's goal should be grabbing all the item cards, as he/she is rewarded with the pictured item. If the Kirbys grab a Mono Soarar card, the background turns red and flocks of Mono Soarars barrage them.

In addition to Mono Soarar, Big Soarar and Small Soarar also appear in this game.

In this game, Soarars act as they do in Kirby: Canvas Curse: they aimlessly glide back and forth through the sky. They have lost their ability to fire lasers completely. Like many other enemies in Kirby: Triple Deluxe, Soarars have gained the ability to cross between the background and foreground of certain stages. These enemies appear in the Main Mode and Stages 2, 3, and 4 of Dedede's Drum Dash. They also appear in the downloadable Dedede's Drum Dash Deluxe.

In this game, Soarar can sometimes be seen with stars and even Treasure Chests following it as it is flying.

Soarar first appears in Stage 1 of Level 4. It flies through the air, often in a line or flock, not trying to cause Kirby any trouble. Like most enemies in the game, scaled-up versions of it appear that can be Inhaled for a Blaster Bullet.

Soarar's name is likely derived from the word "soar," as a reference to its movement. It may also come from the Japanese word for sky, 空 (sora). 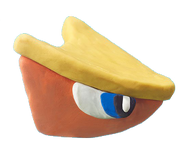 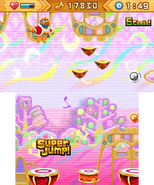