Kirby Wiki
Register
Don't have an account?
Sign In
Advertisement
in: Enemies, Characters, Enemies in Kirby's Return to Dream Land,
and 3 more
English

Regular Enemy
Snowl is an enemy in the Kirby series, debuting in Kirby's Return to Dream Land. It yields the Ice ability when inhaled.

Snowl is a spherical white owl. It has a purple face, two large yellow eyes, and two large blue crest feathers in a V shape. It also has tail feathers, stubby wings, and no feet.

Snowl flies back and forth over snow-covered landscapes, occasionally dropping ice chunks—these will hurt Kirby if he collides with them. Snowls are most commonly found in White Wafers.

Snowl's name is a portmanteau of the words "snow" and "owl," referencing the enemy's design and cold nature. 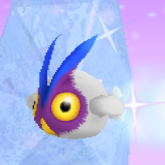