Snooter is a common enemy that appears in Kirby & The Amazing Mirror and Kirby: Squeak Squad. It is a yellow, two-footed creature with big, green lips. Snooters walk around calmly unless Kirby hits them with a weak attack. When this happens, they will become angry, turn red, and start running around really fast for a while. Snooters also eat nearby food items or batteries. If Kirby gets too close to one, that Snooter will chew on him and then spit him out. When Kirby is spat out, he is not able to move unless he hits the ground or a wall, and he only takes damage if he hits a hard surface. This makes Snooter a tad more dangerous when on narrow ledges as Kirby can fall in the abyss. If a Snooter has a Kirby and another Kirby defeats that Snooter with the Kirby inside, that Kirby will be freed and not sustain any damage.

Snooter is a greenish creature with two legs and a large mouth with more vividly green-colored lips. Its name comes from the word snooty, which means pompous, or snoot, which is slang for nose, despite Snooter's noticeable facial features being its lips and not having a visible proboscis. 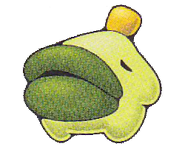 Kirby Super Star Ultra -- Snooter is in the background.
Add a photo to this gallery

Kirby & The Amazing Mirror (Angry)
Add a photo to this gallery
Retrieved from "https://kirby.fandom.com/wiki/Snooter?oldid=266191"
Community content is available under CC-BY-SA unless otherwise noted.