Kirby Wiki
Register
Don't have an account?
Sign In
Advertisement
in: Enemies, Characters, Enemies in Kirby 64: The Crystal Shards,
and 3 more
English

Snipper is an insect-like enemy appearing in Kirby 64: The Crystal Shards and Kirby Tilt 'n' Tumble. He is a small yellow bug with round eyes, tiny legs, and very large jaws that lives in sandy areas. He stays in one deep spot waiting for Kirby to come by - so he can jump up, try to grab him with a bite, pull him underground, and then spit him back above ground, causing him damage. Kirby can tell where he's hiding because where Snipper hides, smoke will be coming out of the ground. He cannot be defeated.

Snippers behave and appear similarly to antlion larvae, which are known to create sinking pits of sand that they use to trap and ambush prey. These larvae have large jaws relative to their bodies, which is exaggerated with Snippers' appearance.

Snipper's name is likely derived from the verb "snip," referring to how it slams its scissor-like pincers together in an attempt to grab Kirby. 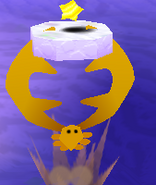 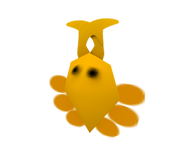