Slide (also slide tackle or slide attack) is one of the most basic moves in the Kirby series and can be used by a multitude of characters, such as Kirby, Gooey, Meta Knight, King Dedede, Bandana Waddle Dee, Shadow Kirby, or any of the playable helper characters in Kirby Super Star, Kirby Super Star Ultra, and Kirby Star Allies. The character using this move slides along the ground with one of their legs sticking forward to kick any enemy or Star Blocks in the way. Some characters may also use different body parts or weapons for this such as Birdon's beak or Blade Knight's sword. It does little damage, but can defeat some weaker enemies in one hit. In essence, if Kirby has no power available and needs to deal fast damage to a foe, the slide attack is better than nothing.

Kirby can use it to attack enemies that he can't inhale like Scarfy. It can also be used to get under places, quickly destroy blocks, or for use as an attack, as mentioned before. The slide attack doesn't work on mid-bosses and bosses, as it is too weak to dent them; it will push Kirby back instead, and he will get hurt. However, it is capable of dealing light damage to other Kirbys in Kirby Fighters and Kirby Fighters Deluxe.

If sliding down a steep slope in Kirby & The Amazing Mirror and Kirby: Squeak Squad, Kirby will perform a move called the Rolling Ram Attack,[1] rolling uncontrollably and damaging any enemy in his path until he reaches flat ground or falls into a pit. Sliding up a slope will not result in a roll. 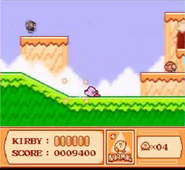 Kirby Fighters 2
Add a photo to this gallery

Retrieved from "https://kirby.fandom.com/wiki/Slide?oldid=340226"
Community content is available under CC-BY-SA unless otherwise noted.