Cutter (by inhaling the Moon Rod)

Slice n' Splice is a sentient and seemingly intelligent robot that holds two special weapons-- a Sun Rod and a Moon Rod (both in the likeness of Mr. Shine & Mr. Bright). It was purchased from Nightmare Enterprises by Dedede. While Slice n' Splice isn't that dangerous itself, the Moon Rod can split a foe into different parts or male and female halves, and the Sun Rod can put them back together-- with their anatomy mismatched if Slice n' Splice or his client so wishes. It was revealed late in the episode that Slice n' Splice was the one that created Lololo and Lalala by using the Moon Rod to split Fofa in two. The robot was destroyed along with its rods when Cutter Kirby severed its left arm before following up with Final Cutter, which sliced it right in half.

Slice n' Splice is a light green, somewhat insect-like, four legged robot. His upper body is rectangular with two thin arms sticking out of the sides. He has large, reddish-orange eyes with green pupils. On his metal limbs, he has black gloves and black shoes. He wields the Sun Rod in his left hand and the Moon Rod in his right. The two rods bear resemblance to Mr. Shine & Mr. Bright, which marks their only major appearance in the anime.

While Slice n' Splice's appearance is not based off anything in particular, His name comes from the fact that he cuts enemies to pieces and then reassemble them. KittariHattari is Japanese for cut and paste.

Slice n' Splice on the attack. 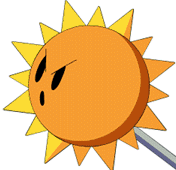 Close-up of the Sun Rod. 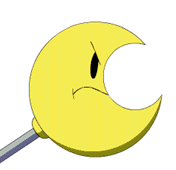 Close-up of the Moon Rod.
Add a photo to this gallery
Retrieved from "https://kirby.fandom.com/wiki/Slice_n%27_Splice?oldid=218269"
Community content is available under CC-BY-SA unless otherwise noted.