Slash & Bead is a sub-game in Kirby's Extra Epic Yarn, starring Meta Knight as the main character. It features levels where Meta Knight runs and flies around, defeating enemies and collecting beads.

Slash & Bead features four stages, however only the first one is unlocked by default. The other stages are unlocked by progressing through story. A new stage is unlocked after beating every other level, starting with Hot Land. Upon entering a stage, a three second countdown will play before giving control to the player. Pressing a direction on the +Control Pad or Circle Pad will cause Meta Knight to move; he can run along the ground or fly around, but will begin to descend if a direction isn't input for a while. Pressing A causes him to slash, to which he can perform four consecutive hits in a similar fashion to Wire. Pressing B or Y causes him to use Piercing Slash, causing him to lunge in the direction input in a similar fashion to Drill Rush. Pressing R while Meta Knight's meter is full allows him to perform a special move that defeats all enemies on screen.

Depending on the rank obtained, the player can obtain up to four mats per stage. These mats are used alongside Fuse Beads to make furniture items.

Slash & Bead's name appears to be based on Slash-and-burn, a type of agriculture involving cutting down plants and burning them to make nutrient-rich soil. The name also closely resembles "Hack and slash," referencing its genre of gameplay. 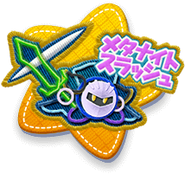 Kirby's Extra Epic Yarn
Add a photo to this gallery
Retrieved from "https://kirby.fandom.com/wiki/Slash_%26_Bead?oldid=316496"
Community content is available under CC-BY-SA unless otherwise noted.