Kirby: Right Back at Ya! (Crusade for the Blade)

Kirby: Right Back at Ya! (Fright to the Finish)

Unknown, but same as her mother

Sirica is a pale and white alien girl in Kirby: Right Back at Ya!, and a semi-important character.

Sirica is the daughter of the legendary Star Warrior Garlude, who teamed up with Meta Knight to reclaim Galaxia and was killed by Kirisakin, entrusting Meta Knight with the sword as her final act. Sirica is just as angry and impulsive as Knuckle Joe, and wields a weapon that can transform into a flamethrower, a grappling hook, a bazooka, a machine gun, and a sword.

First appearing in the episode Crusade for the Blade, she attacked Meta Knight trying to seize his sword for herself. She believed that he stole it and left her mother to die by Kirisakin's hands, but was eventually proven wrong when she learned the truth from the sword. In the end, she helped Kirby use Galaxia to destroy Kirisakin, and therefore became friends with him and the others. She later returned in the final episode, joining Knuckle Joe, Sir Arthur, and his knights as they helped Kirby and friends battle Nightmare.

Sirica is voiced by Tomoe Hanba in Japanese, and veteran voice actress Veronica Taylor in English.

Sirica is similar in appearance to Tiff, save for the white skin and more angular eyes, which are light blue with indigo pupils. She has rosy pink cheeks, and her long hair is held back by a green bandanna. As for the rest of her clothes, she only wears a sleeveless jumpsuit, brown boots and gloves with two callus-like formations (something akin to brass knuckles, possibly to enhance her punching ability), and a green cape with a collar. She carries around a transformable weapon that appears to have been manufactured by Nightmare Enterprises, as evidenced by its symbol on some parts of the weapon.

Concept art of Sirica
Add a photo to this gallery 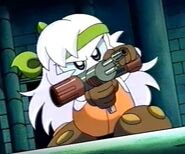 Sirica shooting a grappling hook
Add a photo to this gallery
Retrieved from "https://kirby.fandom.com/wiki/Sirica?oldid=266263"
Community content is available under CC-BY-SA unless otherwise noted.