Sir Slippy, originally known as Slippy,[1] is an enemy that appears in some Kirby games. He is known to be able to attack on both land and under water without his abilities being limited.

Sir Slippys look like frogs- except they only have two feet. Sir Slippys are moderately-common to rare enemies that tend to hop or swim toward Kirby as their method of attack. Sir Slippy gives no ability when swallowed.

Sir Slippy is a frog head with an orange, pink or blue top with a yellow, light pink or green belly. He has two small eyes and small, straight-positioned feet.

Slippy debuted in 1993 video game Kirby's Adventure, he is first encountered early in the game during Vegetable Valley with latter-mentioned attacks.

Slippy is found on the top stage of Whispy Woods Land. He mostly hops around on a small platform toward the top of the screen. Behind him is an item - usually an apple or Invincible Candy. If Kirby defeats all the Cappys, a black Warp Star will appear behind him. Kirby must hit the Warp Star quickly if he wants get to Whispy Woods, because the star will disappear after a moment. Hitting Slippy will earn the player 3000 points.

Slippy appears with a slight redesign under the name Sir Slippy, but its behavior hasn't changed since Kirby's Adventure.

Sir Slippy appears in Stage 2. He swims back and forth and drops food when defeated.

Sir Slippy appears in all of the sub-games except Gourmet Race and all sub-games dedicated to boss battles. He is mostly seen underwater, and when he's on land, he is usually near water. 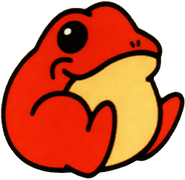 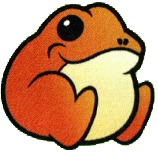 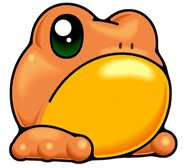 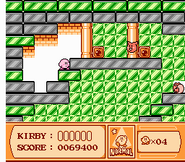 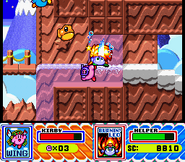 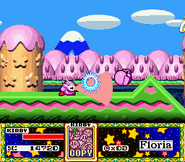 Kirby: Nightmare in Dream Land (alternate palette)
Add a photo to this gallery

Retrieved from "https://kirby.fandom.com/wiki/Sir_Slippy?oldid=326231"
Community content is available under CC-BY-SA unless otherwise noted.