Sir Ebrum is a character in Kirby: Right Back at Ya!. He is the Cabinet Minister of Cappy Town, the father of Tiff and Tuff, and the husband of Lady Like. Being a government official and a tenant in Castle Dedede, he is one of the richest people in Dream Land, with his wealth being only second to that of King Dedede. In several episodes, Ebrum can be seen trying to flatter his boss, King Dedede, when his children defy him in fear of losing his rich lifestyle and living in the streets.

Sir Ebrum is a yellow-skinned being with yellow eyes. He has lavender hair with curls and a large English mustache. He wears a suit with brown trousers (that don't show his feet) and a purple jacket over a white shirt with an orange bow tie.

As mentioned before, Sir Ebrum is the father of Tiff and Tuff as well as the husband of Lady Like. Despite his often comical and clumsy nature, he is an extremely caring and loving father who works quite hard for them. Examples of this are in episodes like Cartoon Buffoon, where he tirelessly works through the night to help Tiff write a good script for her first day at work at the animation studio Dedede built. In The Thing About the Ring, it is revealed that he was so nervous at his wedding that the ring he got for his wife slipped out of his hands and got lost, and Kirby causes his new ring to get lost.

His name is a play on the word "cerebrum," the part of the brain that is responsible for voluntary actions in people and most animals. 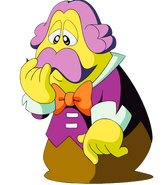 Sir Ebrum and Lady Like when they were younger.

Sir Ebrum in his summer outfit.
Add a photo to this gallery
Retrieved from "https://kirby.fandom.com/wiki/Sir_Ebrum?oldid=323689"
Community content is available under CC-BY-SA unless otherwise noted.