Simirror is an enemy that appears in Kirby Super Star and its remake, Kirby Super Star Ultra. They are garbed in flowing green robes and wear white wizard hats with stars on them. They wield powerful wands which can be utilized to attack with mirror-like magic. They give Kirby the Mirror ability when inhaled and swallowed. They are unique in the fact that they are the only source of the Mirror ability (aside from Copy Essences and Copy Essence Deluxes); Kirby is unable to get it from another enemy or boss.

Simirrors are also the Helpers for the Mirror ability. As Helpers, these wizardly allies always wear red robes with a light brown hat and can do virtually anything Mirror Kirby can.

Simirror serves as both an enemy and a helper in these games. It wanders around waiting for Kirby to approach, and then unleashes a barrage of glassy magic at him when he steps into its range. If the player fires a projectile at this shield-like mirror (such as Cutter Kirby's boomerang), it will be reflected off and inflict damage. Also, Simirror will occasionally clone itself and warp around the stage using its magic. If it is not defeated after the first hit from Kirby, its body flickers away before quickly reappearing behind the pink puff. If the enemy reappears inside a wall, it is defeated.

As stated above, Simirror gives the Mirror ability in this game. He can also perform Mirror Cut underwater. In Helper to Hero, Simirror is playable. This version of Simirror features a green robe, much like the enemy version, but has the same brown hat that the helper version wears. They can shield themselves in a rainbow-colored bubble to protect themselves, much like Mirror Kirby can. Mirror Kirby's Mirror Body lasts slightly longer than Simirror's does.

Simirror appears in this game, where he again provides the Mirror abillity when inhaled and swallowed. 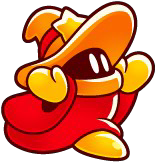 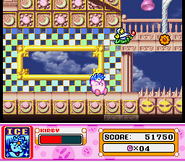 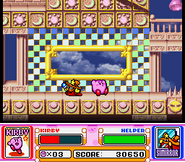 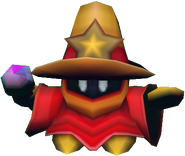 Kirby Super Star
Add a photo to this gallery
Retrieved from "https://kirby.fandom.com/wiki/Simirror?oldid=269185"
Community content is available under CC-BY-SA unless otherwise noted.